Tears and cheers for our big August winners

The amazing success of Team GB and ParalympicsGB at the Tokyo 2020 Olympics put a spring in everyone’s step this summer. But few people got that glorious ‘gold medal’ feeling as strongly as our big August winners.

The National Lottery made a total of 32 millionaires in August, bringing a whole new meaning to the phrase ‘fun in the sun’. And no one was smiling more broadly than key workers Paul and Louise Drake from West Lothian.

When golf-mad Paul realised he had won an amazing £5,162,779 Lotto Jackpot he couldn’t fight back his emotions. He said, “Now, I’m not an emotional guy but I just burst into tears.” Read his amazing story.

EuroMillions also had an amazing month, making 22 UK millionaires in August. One of the biggest prizes went to a lucky UK player who shared the top prize from the 31st August draw with 2 other players from France and Belgium. The lucky Brit won an £18.2MMillion slice of the EuroMillions top prize pie!

Meanwhile, Instant Win Games served up wins almost as quickly as ParalympicsGB served up medals. A total of 7 lucky players won prizes of £50,000 or more and 1 player scooped a £500,000 prize. 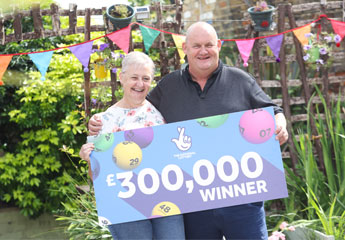 We met Linda and Stewart Priston who scored a £300,000 top prize win on an online Instant Win Game. The hardworking couple from Sittingbourne are planning a very special 35th wedding anniversary following their windfall. Read their heartwarming story.

Last, but by no means least, it was a strong month for Scratchcards. August delivered 14 high tier winners (prizes of £50,000 or more) and 3 of them scratched off a stunning prize of £1MMillion or more.