Many people were happy to say goodbye to 2020 and although we went into a new lockdown in January, there is hope on the horizon with a sharp rise in the number of people getting Covid-19 jabs.

And for some lucky National Lottery players, 2021 got off to a truly amazing start with 38 people winning prizes of £1MMillion or more.

Lotto created 10 millionaires in January 2021 and there were 2 jackpot winners. Malcolm Haines was 1 of 5 people who were made millionaires by the Lotto draw on 9th January. The 49-year-old accountant from Reading is no stranger to big numbers, but admits he was flabbergasted when he realised he’d won £1 million. Read Malcolm's story.

The 9th January Lotto draw was also lucky for Terri Picton-Clark, a champion ballroom dancer, who waltzed off with a £1MMillion prize. Terri has her eye on a new dress and shoes for when it’s safe to hit the dance floor again.

Speaking of Lotto, it was great to hear from Susan Crossland, who won £1.2MMillion on Lotto in 2008 using her late father’s favourite numbers. Susan and her husband Michael chatted to us about the amazing difference the prize has made to their family. You can watch the interview here.

EuroMillions had a strong month too. One lucky player kicked off the year in fine style by winning a staggering £39.8MMillion in the 1st January draw. The same draw saw a total of 10 UK players win £1MMillion each.

Martin Gilbey, a devoted Elvis fan from Northampton, certainly won’t forget January 2021. He was ‘all shook up’ when he discovered he’d won almost £120,000 on a EuroMillions ticket. Martin won his prize in the draw on 8th January, which just happens to be The King’s birthday. Read about Martin’s hunk a, hunk a cash. 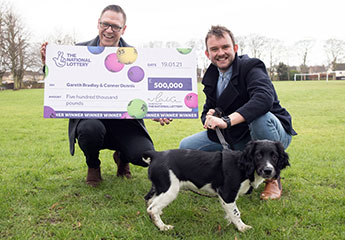 Imagine winning £10,000 a month for 30 years! Well, that’s the prize a lucky winner of Set For Life will be enjoying after playing the game on 18th January. Meanwhile 4 lucky Thunderball winners pocketed the top prize of £500,000 each.

It was also a bumper month for Scratchcard winners. There were 22 in total – 21 of them top prize winners including 3 prizes of £1MMillion, 2 regular payment prizes equalling £1.2MMillion each and 1 prize of £2MMillion. There was also a high tier winner of £250,000 on Triple Jackpot.

Doncaster couple Mark and Sara Plowright have been enjoying bubbles – champagne and dips in a new hot tub – after winning £1MMillion on a National Lottery Scratchcard. Read the Plowrights' story.

And Dan Fisher, a Weston-super-Mare resident who has been hard at work making furniture for NHS Nightingale field hospitals, won £300,000 on a Scratchcard in January.