The Tokyo 2020 Olympics gave everyone a welcome shot of excitement and pride as Team GB turned in an amazing performance. And our July winners had an extra reason to celebrate, especially the 46 lucky players who became National Lottery millionaires.

Even before the Olympics kicked off in Japan there were some fantastic Jackpot wins on The National Lottery’s Lotto game. The 7th July draw started things in fine style when 1 lucky player scooped an amazing £13.1MMillion Jackpot. 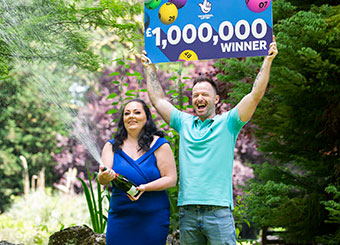 Another EuroMillions UK Millionaire Maker draw had Sammantha Young smiling after her ticket delivered a £1MMillion prize. Sammantha, 33, admitted she thought she had won £1000 at first. Read her amazing story here.

Meanwhile, The National Lottery’s Set For Life game was on ‘Olympic’ form as it served up a top prize winner who will be receiving £10,000 a month for 30 years.

Last, but by no means least, it was a strong month for Scratchcards. July delivered 11 high tier winners (prizes of £50,000 or more) and 3 of them scratched off a stunning prize of £1MMillion or more.

Good Cause story - Howard gets suited for success

New set of clothes helps veteran get the job

Good Cause story - How Charmaine soldiered on

Pulling through after a life-changing injury