Spring has officially sprung; there are lambs in the fields and the daffodils are blooming. The month also put a spring in the step of 32 lucky players who bloomed into National Lottery millionaires.

Several of our players are unlikely to forget the Lotto draw held on 12th March 2022. It yielded 2 jackpot winners who pocketed an incredible £2MMillion each. A further 9 Lotto players became millionaires thanks to big wins in March. 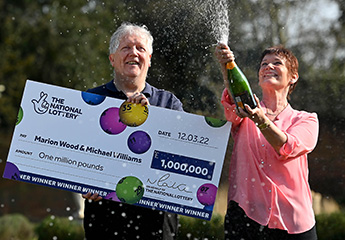 We met NHS worker Marion Wood, 60, and Michael Williams, 67, pals from Northampton who play as a syndicate. They are each looking forward to enjoying a half share of the £1MMillion prize they won in the 12th March Lotto draw by matching 5 main numbers plus the Bonus Ball.

Recounting the amazing moment they realised they’d won a big prize, Marion said, “I started to shout out the numbers on my ticket to Michael and he shouted ‘yes’, then ‘yes’’, then another ‘yes’ and then his voice changed – in fact he squeaked! There was another ‘yes’ and the final ‘yes’ was followed by a ‘Can you come here please?’”

You can read all about Marion and Michael’s incredible win here.

March was also a fantastic month for EuroMillions. A total of 18 UK players became EuroMillions millionaires.

There was plenty of Thunderball action too, with 8 players winning a top prize of £500,000.

Meanwhile, the Instant Win Game action was fast and furious. A very lucky player won £300,000 on Triple Cashword and another scored a £100,000 prize on Monopoly Gold Classic.

Last, but by no means least, Scratchcards enjoyed a phenomenal month. 2 lucky players scratched off prizes of £1MMillion each and another scored a whopping £2MMillion prize – enough to put a spring in anyone’s step.