When Harold Liberty steps into the wooden huts at Bletchley Park, where intelligence staff, including the mathematician Alan Turing worked tirelessly to break the German Enigma code during World War 2, he is transported to another time. 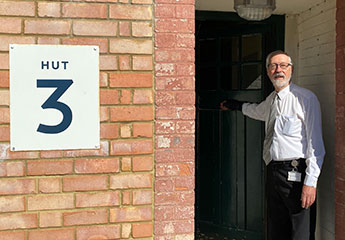 Harold, 70, said, “I still get a bit spooked. The conditions in the huts are so incredibly spartan – trestle tables, folding chairs and bits of paper. They’re cold in winter and hot in summer. I wonder how the people who worked there created these systems to do the extraordinary job of breaking the codes and getting the intelligence out.”

As a volunteer steward and guide at Bletchley Park – the country house in Buckinghamshire used as a code breaking centre during World War 2 – Harold enjoys sharing the extraordinary story made famous by the 2014 film The Imitation Game. The timing of the film starring Benedict Cumberbatch as Turing was fortuitous – an extensive restoration of the site (including the wooden huts) had been carried out with the help of National Lottery funding.

Harold said, “The huts are crucial to the story – they’re where the Enigma code material was tackled and the intelligence processed. And we might well have lost them without the restoration work.” 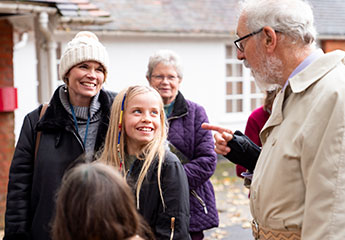 Harold first took an interest in the Bletchley Park story when its secrets were declassified in the mid-1970s. When he retired as a teacher in 2013 he didn’t hesitate to sign up as a volunteer. Since then, he has worked 2 to 3 days a week as a steward, a guide and part of the Bletchley Park outreach team.

What does he find so compelling about the place? He said, “It tells a unique story: there is no place like it, or a set of events like it. I’m fascinated by the extraordinary intellectual achievement of the men and women who worked there and found new mathematical techniques and machinery to process all this data. Bletchley Park moved from being a code breaking facility to an intelligence factory – a place that is fundamentally important not just to World War 2, to our contemporary world.”

You don’t have to have an interest in code breaking or mathematics to enjoy Bletchley Park. Harold said, “It’s a great day out. You’ve got space and greenery, but beyond that there’s a unique story of what people did there during the war.”