The highlight of Vickie Larkin’s career as a zoo keeper occurred in December 2017, a few days before Christmas. Arriving at the Highland Wildlife Park’s polar bear den to top up the animals’ drinking water, she heard something resembling the cry of a human baby. 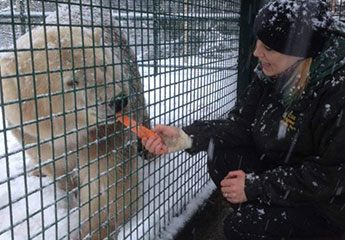 Vickie, 45, quickly realised that the Park’s female bear, Victoria, had given birth. She said, “It was so exciting – my heart was beating really fast.”

It would be another 3 months before Victoria’s cub, Hamish, finally emerged from beneath his mother’s fur. But as the person who discovered him, Vickie still feels a deep connection.

As the carnivore team leader at the National Lottery-supported Highland Wildlife Park – a 105-hectare safari park and zoo located in Scotland’s spectacular Cairngorms National Park – Vickie has daily encounters with all sorts of amazing creatures. Hamish now lives at Yorkshire Wildlife Park, but Victoria and 2 male polar bears called Walker and Arktos remain firm favourites with visitors. Vickie also looks after the Amur leopards, the wolverines, the Scottish wildcats and the... hoverflies.

Yes, you read that right. As well as caring for some of the planet’s larger mammals, Vickie is helping restore the population of an insect whose numbers have severely declined due to the loss of the ancient pine forests that are its natural habitat. 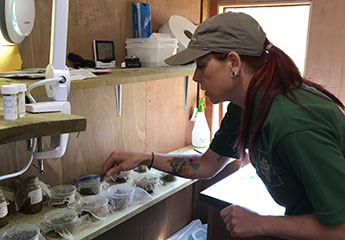 The hoverfly project started about 3 years ago with 25 insects imported from Sweden. Under Vickie’s watchful eye, the Highland Wildlife Park has bred about 160 adults this year.

If you think checking up on a hoverfly in a jar lined with wet sawdust is rather less exciting than feeding raw salmon to a 600kg polar bear, think again. Vickie said, “I love the hoverflies! They’re really cool. We’ve managed to get the breeding conditions just right and this year we have 7000 larvae. We’re planning to release the adult hoverflies back into the wild.”

Why is the Highland Wildlife Park such a great place to visit? Vickie said, “It’s one of the most stunning zoos you’ll ever visit in terms of its location. All the staff are super friendly and we’ve got a great conservation ethic and quite a unique collection of animals including polar bears and wolverines.” And hoverflies, of course.