Loss of baby and husband inspired Rhian to help others

It is almost 10 years since Rhian Mannings experienced the devastating loss of her husband and baby within the space of 5 days.

Her son, George, was just 12-months old when he suffered a seizure and was rushed to hospital in South Wales. Rhian and her husband Paul watched helplessly as medical staff tried desperately to save the infant’s life. But there was nothing they could do – George died 2 hours later.

Rhian and Paul went home and told their 2 young children, Holly and Isaac, that their baby brother was a ‘star in the sky’. Rhian said, “We told each other we loved each other and that we would have a good life in honour of George. Things were tough but Paul and I were closer than ever.”

Then 5 days after George’s death Paul, 33, got in his car and drove away. Rhian didn’t discover he had taken his own life until 2 police officers arrived at her house. She said, “My body completely shut down. It took years to accept it had happened.”

Despite her pain, Rhian felt a compelling need to help other families who suffer the loss of a child or young person. She set up 2 Wish Upon a Star, a project that has helped more than 890 bereaved families to date. Thanks to funding from The National Lottery, it has been able to recruit 2 members of staff to help families in North Wales.

Rhian said the funding “has changed lives”. She added, “We’ve quadrupled the amount of families we’re supporting in North Wales, which is incredible – and all because of National Lottery players.”

It also works hard to help fathers who are often slower to engage. Rhian said, “We have a rugby team and football team and have organised paintball socials. Often it’s just enough for these dads to know they’re with someone who really understands just what they’ve been through.” 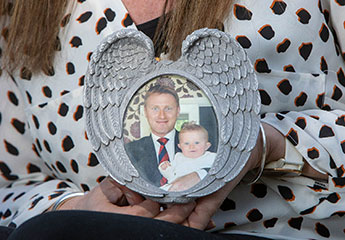 Prior to the pandemic, 2 Wish Upon a Star provided face-to-face counselling to support bereaved parents and children. Over the past 12 months it has worked hard to deliver these services online. It has also introduced online coffee mornings and social events such as quizzes and bingo to keep people connected.

Rhian said the success of the project has been a massive comfort because it has kept George and Paul’s memories alive. She added, “I’ve met the most amazing people who have thanked me for helping them – but they’ve helped me too.”

National Lottery players have raised £1BNBillion to help people across the UK during these unprecedented times.