Susmitha Gadiyar admits she cried when she saw the words Siddharth, her autistic son, had written on the brightly-coloured painting. 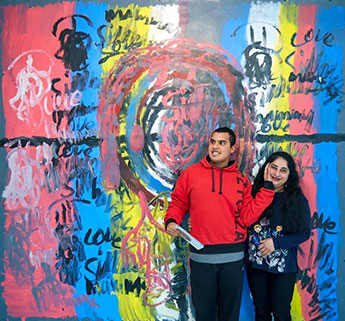 The 22-year-old, who also has a severe learning disability, severe speech and language impairment, epilepsy, ADHD and challenging behaviours, had used his paintbrush to inscribe the words “Siddharth love Mummy” over and over again.

Susmitha said, “It was the first time in his life that he had conveyed that message to me. He can’t read or write, but each year he would send Christmas cards to his friends at school by copying a greeting I had written down. And when he wrote the words ‘love Siddharth’ I would hug and kiss him so that he understood it meant affection. I never thought he understood such an abstract emotion until the day he did his painting.”

The painting – titled Siddharth Love Mummy – is just one of the extraordinary works Siddharth, or ‘Sid’ as he is widely known, has created since starting classes at Project Art Works, a National Lottery-funded collective of neurodiverse artists and activists based in Hastings. His large, colourful canvases have been exhibited at several galleries since then and his talent is an enormous source of pride for his family.

Susmitha said, “I am proud of him obviously, but more than anything I’m happy at the way painting calms him. It’s so therapeutic.”

You can see a time-lapse video of Sid creating one of his paintings at Project Art Works here.

Sid’s work is set to attract even more admirers when a painting commissioned by The National Lottery is used as the centrepiece of our campaign highlighting the fun, unexpected side of the projects supported by the £30MMillion raised each week for good causes. Sid’s colourful ‘30’ artwork will be featured in the masthead of 4 national newspapers as well as on roadside and digital billboards. 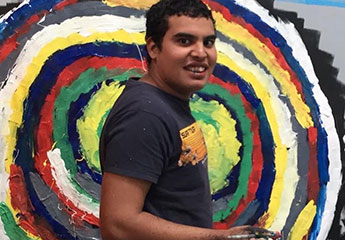 Susmitha said, “It will be interesting to see how Sid reacts if he sees his work when he’s out and about. I’m so happy he’s done it. My whole life I’ve been told ‘he can’t go here, he can’t do that’, so it’s amazing he’s doing this [The National Lottery campaign] and contributing to society.”

Susmitha is full of praise for Project Art Works who welcomed Sid with open arms despite what she describes as a “long list” of challenging behaviours. She said, “I read Project Art Works the whole list and they didn’t hesitate, they just said ‘bring him’. They make everything safe for him by putting away breakables, shutting all the doors and removing triggers.” 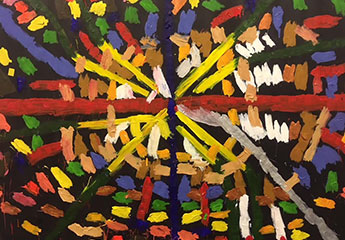 Since his first class in December 2017, Sid has visited Project Art Works most Fridays for a 2-hour art session. When he was unable to attend face-to-face classes due to the lockdown, he and his family were supported via zoom calls.

Susmitha admits she is astonished by her son’s talent. She said, “There’s no pressure to learn, or perform or do things in a certain way. They just let him do what he wants. And when he paints he’s very focussed.”

The classes have clearly become the highlight of Sid’s week. Susmitha said, “He says ‘Friday Hastings, Friday Hastings! I think every town and city in the UK should have a Project Art Works.”

When we all play a little, amazing stuff happens.

Find out more about Project Art Works below.