Jacqueline Miller was 47 when serious illness turned her life upside down. And the businesswoman from Ayrshire in south-west Scotland credits a National Lottery-funded health and wellbeing project for helping her get her life back on track.

In December 2016 Jacqueline’s husband, Steven, had a massive stroke causing severe brain damage. Doctors said he was unlikely to survive and, in the unlikely event he did, he would be bed-bound for the rest of his life. 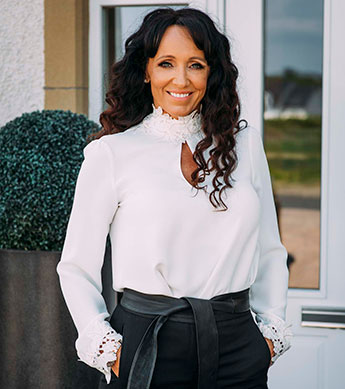 As well as caring for her husband and looking after their 2 sons – one had just started university, the other was still at school – Jacqueline was left to manage the couple’s 3 property management companies and their 25 employees.

She said, “You can imagine the kind of stress I was under. Then, within 10 weeks of Steven’s stroke, I was diagnosed with stage 3 colon cancer.”

Jacqueline admits she was thrown into a “tailspin”, but struggled to show her emotions. She said, “I’m an only child and I felt I had to digest it and get on with it. I immediately took on a kind of warrior attitude to cancer. The surgeon said ‘you know it’s OK to cry’ and I replied ‘I’m not going to’.”

Her stoicism was not sustainable, of course. But it took a National Lottery-funded health and wellbeing project – Ayrshire Cancer Support (ACS) – to help her open up and begin to look after herself as well as her family and businesses.

She said, “ACS was there on hand to offer me a chance to talk about the effects this had on my life, my family and my emotions, with counselling sessions. It was comforting to talk openly and let my feelings out because I’d kept them hidden from family, friends and colleagues.”

ACS also organised massage sessions which helped alleviate some of the incredible stress Jacqueline was experiencing.

Several years later, Jacqueline’s life has regained some equilibrium, but remains challenging. A surgeon successfully removed her tumour, so she did not require chemotherapy. Steven is able to walk, but is unable to speak. She said, “Sadly, his personality has completely transformed.”

Jacqueline – who also works as fitness instructor – is as busy as ever. But her gratitude to ACS has inspired her to become an ambassador for the project.

She said, “The support from this organisation at a most terrifying time in the lives of so many is crucial and I’m hoping that I can interact with the business community in Ayrshire to raise funds to enable this support to continue for us.”

Jaqueline is especially passionate about the launch of ACS’ Children and Young People’s services throughout Ayrshire. She feels it is essential that younger people and their families have access to the same support that helped her cope with her illness.

She said, “Even for a grown up to go through this is incredibly difficult; a young person must be completely blindsided by it.”