Joe’s giant steps to a new kind of ballet

Watching Joe Powell-Main use his crutches to perform an elegant jete it is hard to imagine the 22-year-old once believed he would never achieve his aim of becoming a professional ballet dancer.

He said, “It feels amazing and at times I can’t believe it’s happening. This is something I’ve been striving for for so long and there were times when I didn’t think it was possible.”

Joe is a member of Ballet Cymru, a National Lottery-funded dance company based in Newport, Wales. He was asked to join after Amy Doughty, the Company’s Assistant Artistic Director, saw some videos he had posted online showing him performing ballet using his wheelchair and crutches. 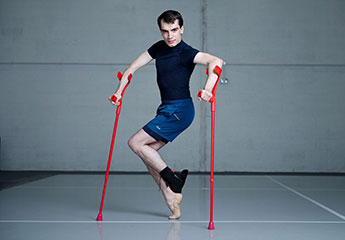 Ballet Cymru was so eager to explore and learn from Joe’s innovative approach it sponsored him to attend its Pre-Professional Programme. An invitation to join the Newport-based company as a full-time dancer followed and Joe is currently rehearsing his role in a production of Giselle that will be performed in late 2021.

His success is all the more remarkable given the hurdles he faced at a tender age. Joe began dancing at the age of 4 and fell in love with ballet when his mother took him to see Swan Lake a year later.

He said, “Mum thought I wouldn’t be able to sit through it, but I couldn’t take my eyes off the stage.”

His obvious talent was recognised when, at the age of 11, he was given a place at the prestigious Royal Ballet School in London.

For a while, the boy from the Welsh borders, seemed to be living a kind of Billy Elliot fairytale. But a growth spurt and his intense dance schedule left him with a serious knee injury that required surgery at the age of 14.

The operation left him with little muscle activity in his left leg and his foot turned at an awkward angle. Forced to use a wheelchair at the age of 15, he assumed he would never dance again.

He said, “There was a time when I couldn’t look at anything to do with dance because it was too traumatic.”

Joe’s love of dance was rekindled when his mother spotted a leaflet advertising Wheelchair Ballroom Dance classes. He went on to compete at regional and national levels and won medals in Latin and Ballroom dancing. But his first love – dancing ballet – still seemed unattainable.

Determined not to give up, Joe filmed himself performing ballet steps using his crutches and wheelchair. He said, “I put them online to see what kind of reaction I’d get. I wanted to see if anyone else was in a similar situation.”

Working with Ballet Cymru, he is forging a new ballet vocabulary. She said, “Every dancer in the world has challenges and things they’re not so strong at. Joe is no different. We challenge him every day and he’s great.”