Ratna, along with her husband and baby had to flee her homeland as an asylum seeker and move to the UK. Forced to seek sanctuary in a foreign country where she didn’t know anyone and couldn’t speak the language, the 32-year-old from India ended up isolated and lonely during the pandemic. 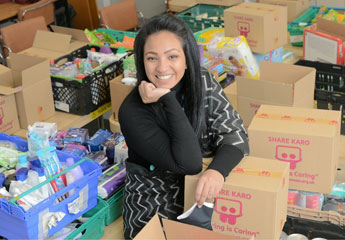 Thankfully, Ratna found and was supported by Being Woman, a National Lottery-funded charity based in Northumberland set up to combat isolation in minority groups by offering internet and English classes. During lockdown all classes went online and Ratna was given a laptop with Wi-Fi to join English lessons 2 days a week. Ratna said, “We were totally alone when we came here during the first lockdown,” but she has made friends through those classes and says, “I’m not alone anymore.”

Stories like Ratna’s inspire Fareeha Usman, the founder of Being Woman. Fareeha, 35, said, “I’m so proud of Ratna. Her English is improving and her confidence is growing. She smiles now.” Fareeha added, “Our work is all about people, their expressions, their dreams and their aspirations. We were able to connect to people during Covid when people needed us the most.”

Fareeha and her team also used some of their National Lottery funding to deliver food and essentials throughout the pandemic, as well as ringing people for a chat.

Being Woman was set up by Fareeha over 3 years ago after her own experience of loneliness after moving her family to Northumberland from London. Fareeha said leaving behind her community was a shock. She said, “It was like we had landed into a different world! It was very difficult to know or see anyone who looked like us.”

Setting up the project wasn’t always easy. Fareeha had to fight to break down stereotypes and in the early days she was constantly questioned about Being Woman. Fareeha said, “The rejection kept me going. In the first few months it was very difficult to be recognised – a lot of people who I met the first question I would always be asked is ‘do you speak English?’ I will never forget that. Everywhere I went that was the first question I would be asked.”

Over the past year National Lottery players have raised over £1billion to help people across the UK during these unprecedented times.