How Charmaine pulled through after a life-changing injury

It is more than 10 years since a bomb blast in Afghanistan robbed Charmaine Healy of her leg and the army career she had dreamed of since she was a child. 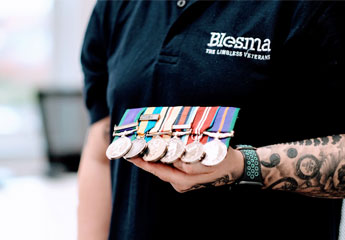 She was on her 2nd tour of Afghanistan’s Helmand Province with her regiment, the Royal Signals, when the call came in that a convoy of Danish troops had been hit by an improvised explosive device (IED). One Danish soldier had been killed; several more had been injured.

Charmaine and her unit were flown to the scene by helicopter to make it safe. She said, “We’d only been on the ground about 10 minutes when one of the Danish soldiers stepped out of a vehicle onto another IED. The blast caused a grenade he was carrying to explode.”

Shrapnel from the grenade passed underneath the chassis of one of the Danish vehicles and struck Charmaine’s leg. She said, “When we heard the blast we thought it was an RPG (rocket propelled grenade) and took cover. When I tried to stand up I collapsed in agony. Shrapnel had gone through my boot, severed my achilles tendon and smashed into the bone.”

Airlifted back to the UK, Charmaine began the long, difficult journey to recovery. At first, doctors thought they could save her damaged leg. But when she developed an agonising nerve condition after undergoing 8 operations in 3 years, she elected to have the limb amputated.

She said, “It wasn’t such a hard decision for me – I’d seen amputees and people with similar injuries to me who were progressing. But my family struggled to understand my decision. It took a bit of time for them to come to terms with it.”

Charmaine’s injuries weren’t all physical: she’d been diagnosed with PTSD before being discharged from the army and struggled to come to terms with the end of her 12-year military career. She said, “It’s your whole life, it’s not just a job. I knew I’d be medically discharged after the amputation, but it doesn’t really hit you until it happens. You feel like you’ve lost everything.”

It was during this time – at her lowest point – she was introduced to Blesma, The Limbless Veterans. The National Lottery-supported charity arranged for her to go on a cycling holiday in Belgium with a group of veterans with life-changing injuries.

The holiday was just the start. Charmaine, 40, said, “They helped me with everything I needed help with. They’d help me fill in paperwork and they’d come to medical appointments with me if I needed assistance.”

By 2017, Charmaine’s recovery was so advanced she was able to compete at the Invictus Games in Toronto, winning silver in power lifting and bronze in wheelchair basketball.

When, a few years ago, Charmaine’s leg began to bleed each time she tried to attach a prosthetic, Blesma again stepped in to help. It arranged for her to see a senior doctor at The Veterans Trauma Network, an NHS service providing specialist care and treatment for ex-service personnel. He diagnosed the problem and operated in July 2020. By December, Charmaine had returned to being a fulltime prosthetic user.

Having moved back to Clacton-on-Sea to be near her family, Charmaine is giving back as part of Blesma’s Making Generation R campaign. It arranges for injured veterans to talk to secondary school students about overcoming adversity – a subject Charmaine knows more about than most.

She said, “Honestly, it’s been really tough. What pulled me through was family and friends and being able to talk to people about how I was feeling. Slowly, you gain a bit more confidence and slowly things start to pick up.”