British actor and director Aml Ameen has sent a heartfelt thank you to National Lottery players for helping get his romantic comedy Boxing Day onto the big screen.

Aml, who stars in the film alongside Little Mix singer Leigh-Anne Pinnock, said, “This is a shout out to all the National Lottery players – thank you, thank you very much. You’ve helped make my film a reality.”

Boxing Day is a heartwarming transatlantic Christmas story starring Aml as Melvin, a British author living in Los Angeles who has just proposed to his American girlfriend Lisa (Aja Naomi King). The couple decide to fly back to London for Christmas so Lisa can meet Melvin’s family.

Unfortunately, it isn’t long before Melvin and Lisa run into Georgia (Leigh-Anne Pinnock), a superstar singer who just happens to be his ex-girlfriend. 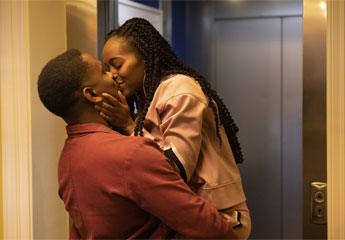 Aml describes his film as “the first of its kind in British cinema where a Christmas-set rom-com is led by an all-Black cast”.

Boxing Day is Leigh-Anne’s acting debut. She said, “I am truly honoured to have been able to be a part of this film but also truly proud, to witness the arrival of a film that celebrates black culture, black talent and black love.”

Watch Aml Ameen's heartfelt thank you to National Lottery players for helping his romantic comedy Boxing Day get onto the big screen.

Enjoy the official trailer for Boxing Day below: