Over 32 years ago, aged 17, renowned Kurdish singer Nawroz Oramari was imprisoned and tortured after being accused of singing songs that were critical of Saddam Hussein’s political regime.

He said, “I was arrested and, together with my father, had to sign a pledge that I would never sing again – not even at home with friends. If I did I would be executed.”

Detained for over 3 months, Nawroz didn’t see the sun for 33 days and was tortured for 24 of them. 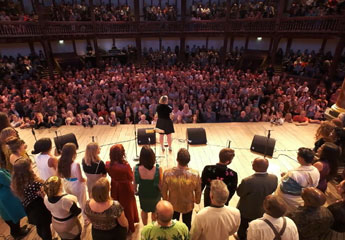 To escape the violence, Nawroz fled his homeland of Iraq Kurdistan, leaving his entire family behind and living in exile as a teenager in Iran, Iraq, Syria and Lebanon before settling in the UK.

Now 59, Nawroz has been performing as a soloist with the National Lottery-supported Citizens of the World Choir. The London based choir is a multiracial group of refugees and asylum seekers set up to help promote greater understanding of people displaced by war, famine and persecution.

Nawroz joined the choir over 3 years ago after running a workshop for the project and it has provided a social lifeline ever since, viewing his fellow singers as his “selected emotional family.” After leaving home, Nawroz only saw his parents twice before they died – his mother as an indirect result of Saddam Hussein’s chemical attack on the Kurds. He said, “I don’t have a wife, don’t have kids, don’t have that many friends – I don’t even have a dog! So the choir is like my new family.”

Set up in 2017 by a team including teacher Becky Dell, they put word of the first rehearsal out through social workers and refugee and migrant charities, attracting 30 people to the first session.

Becky, a 41-year-old classically trained musician, said, “At least half of them had never sung before and some of them came from countries where singing is banned.” She added, “There were no auditions and no one has ever been turned away – I didn’t want people who had already been through all sorts of trauma and stress to have to validate themselves to be in the choir.” Now, no less than 28 different nationalities are represented among the 53 members.

National Lottery funding for the Citizens of the World Choir enabled them to buy second-hand devices for all the choir members, allowing them to carry on with online rehearsals at a time when many people were feeling isolated and lonely.