Dominic ‘Dom’ Warren was dropping his two young children off at school in Hastings in May 2015 when he saw something that would change the course of his life.

He said, “I noticed some children whose family were clearly struggling and who looked as if they might not have had breakfast. Right away I wanted to do something.”

Within days, the electrician and his 33-year-old partner Alexandria had sketched the plan for 'Dom’s Food Mission' in a notepad and set about making it a reality. The timing was difficult – the couple were getting married in August – but the idea of collecting surplus food and distributing it to food banks in the East Sussex town was just too compelling to put on hold. 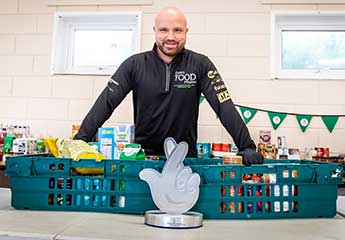 Five years down the track, Dom and Alexandria have been named winners of the Environment Category at the 2020 National Lottery Awards. This year’s winners – selected from 5000 nominated projects from across the UK – recognise the ‘Lockdown Legends’ who have worked tirelessly to help others during this extraordinary year.

Instead of an awards ceremony, this year’s National Lottery Awards are being delivered to the winners by a celebrity with a special interest in their work. Dom and Alexandria were handed their award by This Morning resident doctor and former Strictly Come Dancing star Dr Ranj Singh, who has written books on nutrition and affordable, healthy recipes. 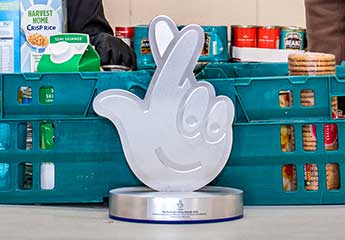 Dom said, “The award is a massive thing for us. In the grand scheme of things we’re a small charity, but we pack a hell of a punch. [The award] shows that people do care and we’re on the right track. I am very proud of it, but there’s a lot more to come from us yet.”

The Food Mission started as a Facebook page asking for unwanted food. Dom and Alexandria met donors in a car park and in the first week collected enough to feed 160 people.

The charity has grown massively since then thanks to partnerships with companies including Marks & Spencer, Asda, Greggs and Morrisons. At the height of the lockdown Dom, Alexandria and a small team of volunteers delivered 8000 food parcels a week to families in Hastings.

Dom estimates his charity is preventing 35,000 tonnes of food going to landfill every month.

In August 2019, Dom’s Food Mission expanded even further when it received a National Lottery grant of £208,000 for a two-year project called A Helping Hand. The scheme uses surplus food which is taken to schools and used to teach valuable life skills such as cooking to 1,000 children a month.

The National Lottery funding allowed Dom to run the project full time, a life change that has given him immense satisfaction. He said, “I love it, I absolutely love it. We’re getting hundreds of tonnes of food now that would have been thrown away and we feed thousands of children a month. I think my granddad hit it on the head when he said, ‘You were put on this Earth to do this’.”