When most people look at a plate of home cooked food they see a tasty meal. For Tony Gibbons a bowl of pasta or fillet of fish is also a way of bringing people together, starting a conversation and changing lives. 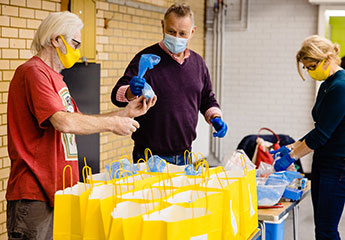 The 81-year-old retired restaurateur has devoted the past 15 years to The Friendly Food Club, a charity that has helped thousands of struggling families in Dorset learn to cook affordable, nutritious meals and make new friends.

Tony’s unflagging efforts to change lives one recipe at a time have seen him named winner of the Education category at the 2020 National Lottery Awards. This year’s winners – selected from 5000 nominated projects from across the UK – recognise the ‘Lockdown Legends’ who have worked tirelessly to help others during this extraordinary year.

Tony, an indefatigable octogenarian who had a stroke two years ago and is currently recuperating after an operation on his knee, said he was astonished to win the award.

He said, “I’m gobsmacked. It came as a total surprise.”

Determined to stay connected with the vulnerable people who had attended the workshops, Tony asked The National Lottery if he could repurpose the funding. This was readily agreed and the result was the Cookbox, a parcel containing all the ingredients to make healthy meals as well as quizzes, games and activities to support home learning.

The Cookbox proved more popular than an ice cream van on a hot summer’s day. From 16 boxes a week for families on low incomes at the start of the lockdown, the tutors and volunteers at the Friendly Food Club were soon delivering 250 a week to families in 6 Dorset communities.

Tony said, “We had no idea it would take off the way it did. We ended up delivering about 4,500 Cookboxes during the summer and we’re still going.”

The second lockdown means the Cookbox is back in demand. Tony said, “We’re now doing variants of the box for people with learning disabilities and the BAME community. We’ve actually busier now than we were last year.”