How Adele and Jesse J put the beats into books

Liz Lawrence admits she was a little nervous when she played a mid-afternoon gig at Widnes Library in February, a couple of weeks before the lockdown. Standing in front of an audience containing a lot more babies, young children and elderly people than she was used to, the 30-year-old musician made sure her on stage banter was strictly G-rated.

Not that Liz – an indie musician more used to playing late night shows with bands like Bombay Bicycle Club and Scouting for Girls – didn’t enjoy the experience. She said, “I’ll definitely play more [library gigs] because I really, really enjoyed it.”

One thing Liz didn’t have to worry about was being told to ‘shush’ by a librarian. Her show was organised by a National Lottery-funded organisation called Get it Loud in Libraries (GILIL) which has staged more than 400 gigs in libraries since 2005. 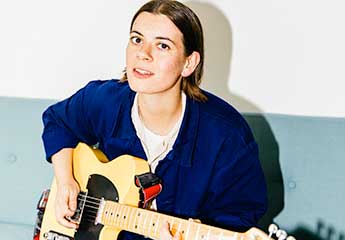 Liz was also following in some seriously famous footsteps because Stewart Parsons, the founder of GILIL, seems to have a knack for booking musicians destined for greatness.

The roster of GILIL artists who have rattled the bookshelves include a young singer called Adele, who was the support act at a gig at Lancaster Country Library in January 2007. She was booked after Kate Nash became unavailable at short notice.

Stewart said, “The Adele gig was a happy accident. We had to dash across the road to a pub to borrow a barstool for her to sit on. Her material at that point was only really available online. She accompanied herself with an acoustic guitar and she knocked everyone dead with just four songs. When she played 'Later… with Jools Holland' a bit later that year everyone was saying, ‘Hey, that’s the girl from the library!

“I could tell the moment she started singing she was something special. You know when you’re in the presence of greatness. Solo female voices come and go, but you just knew when you heard her that she was going to be a superstar.”

Other big name acts who have performed under the GILIL banner include The Vaccines, Ellie Goulding, Jesse J and Florence and the Machine.

Parsons, a former librarian with a passion for live music, believes libraries are the perfect place for gigs. He said, “The acoustics are amazing. You’ve got all that carpet and all these books and they just soak up the frequencies to produce an incredible sound.”

But great acoustics are just one part of the GILIL story. For Stewart, the concerts are “transformative” events capable of introducing a new audience – young indie music fans in particular – to the delights of libraries as well as bringing great music to the smaller towns and communities often bypassed by touring musicians.

Groups for babies and toddlers are commonplace at libraries, but by the time they become teenagers the local library isn’t always seen as a cool place to visit.

Parsons is determined to change that perception one gig at a time. He said, “A library might help you pass an exam, discover a new author or find something out you didn’t know – they can only add value to someone’s life. The gigs are the vehicle, but wrapped around them are all these social outcomes and impacts that funders such as The National Lottery have picked up on.”