How Miles became a guiding light

St Helen’s Square in central York is a place Miles knows well. At one point – before his addiction to alcohol robbed him of his job and family and almost took his life – he managed a bank in the Square, drank in its pubs and dined in its restaurants.

In the months before the pandemic, the 51-year-old recovering addict was more likely to visit the Square as a tour guide. His Health and Wealth tour mixed historical information about the area’s grand buildings with very personal details about his experiences of addiction and homelessness. 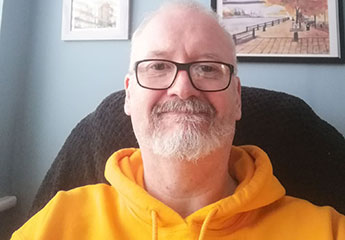 His recovery – which began the day he entered rehab on 20th November 2018 – has been supported by a social enterprise called the Good Organisation. The National Lottery-funded project helps marginalised and disadvantaged people by finding them opportunities in York’s tourism sector.

The Good Organisation’s impact on Miles’ life has been profound. He said, “I had to lose everything to find out what it was that I wanted. I got lost in life, but I’ve found myself again through the Good Organisation. They give me structure, purpose and autonomy. They make you feel that you’re not a lost cause.”

Walking tours of York have been suspended, of course. But thanks to some additional funding from The National Lottery designed to help projects respond to the pandemic, Miles – or rather his voice – continues to guide visitors around the city.

Using computer technology it acquired with the help of its funding, The Good Organisation has developed a GPS-enabled app called Audible York that provides self-guided tours of the city. The first tour available on the app is an exploration of poverty and the voice providing the commentary belongs to Miles.

Kenny Lieske, a director of the Good Organisation, said, “We got the National Lottery funding in the first week of the pandemic and it allowed us to be very agile in the way we responded.”

While being the voice of an app is gratifying, Miles is looking forward to the day he can lead face-to-face walking tours again. The work suits him, he said, because he enjoys meeting people and his workload is flexible enough for him to take life day by day. He said, “I have to manage my recovery each day. I can say today is a good day, but I can’t tell you about tomorrow.”

Miles’ addiction took a heavy toll on his life. For years he suffered anxiety and depression, but refused to acknowledge he was masking his feelings with a deepening addiction to alcohol. He said, “My family told me I needed to curb it, but I didn’t listen. At my lowest point I was sneaking bottles of vodka into the family home and drinking at work. The addict in me said it was everyone’s fault but mine.”

When relations with his family broke down he moved out of the family home and took to ‘sofa-surfing’ for about a year. At his lowest ebb he checked himself into a hotel in York with the intention of ending his life. Thankfully, he was unsuccessful, but his drinking continued.

Miles made 4 attempts to get sober on his own, each time suffering debilitating seizures as part of the withdrawal. His 4th attempt saw him collapse and land “face first on the pavement” in central York before he was taken by ambulance to hospital. It was then he decided to enter rehab.

His participation in a 12-week recovery programme was important for two reasons: It got him sober and introduced him to Kenny Lieske who visited the rehab centre to give a talk. Kenny suggested the idea of becoming a tour guide and Miles accepted.

When Miles guides visitors around York – in person or on the app – he makes sure to point out the rough sleepers as well as the grand buildings. He said, “I want people to understand how easy it is to drop into homelessness and how judgemental some people can be.”