The clocks have gone back, the evenings are dark and that means it’s time for everyone’s favourite spoooooooky festival – Halloween.

The origins of Halloween are thought to have started as the festival of Samhain, a Gaelic tradition marking the end of summer. It’s thought that this ancient festival is the origin of modern day Halloween.

A little later the Tudors had their own traditions, which may well have been part of life at Little Moreton Hall in Cheshire. There are plenty of hints at this including the discovery of 250 burn marks, circle designs and criss crossing lines. These were found near windows, fireplaces and blocked doorways. Historians think these marks were ways people dealt with fear, and that they were a form of protection.

There are lots more amazing tales to tell about the UK’s most haunted places. Here are some of the National Lottery-funded UK heritage sites which offer their chilling tales this Halloween. 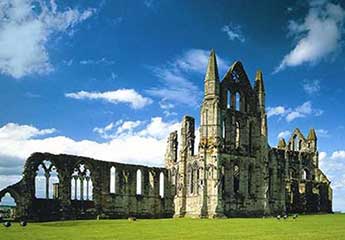 Famous for being part of Bram Stoker’s inspiration for Dracula, there’s a lot more to the story of this amazing heritage site.

Before Stoker conceived of his blood-sucking creations, a young nun called Constance de Beverley fell in love with a brave knight called Marmion. When her fellow nuns discovered this they punished her, by bricking her into the walls of the building while she was still alive.

Legend has it that her ghost can be seen around the Abbey begging to be released.

Captain Scott was glad to step off this ship after a gruelling expedition to the Antarctic over 100 years ago, but not everyone disembarked. The ghostly footsteps of crew members can still be heard wandering the deck. The ghost of a young man who fell to his death from the crow’s nest has been seen running around the ship and in one of the cabins. Visitors say his ghostly shape can be seen so vividly, they've stopped to have a chat with him.

Terrifying tales revolve around Tom Fool, a notoriously cruel court jester who lived at Muncaster Castle during the 16th century. You're unlikely to see him, but you might feel him – possibly standing on your bed, poking you in the leg, or gently stroking your hair.

You can stay in the Tapestry Room, where most of the castle’s paranormal activity takes place...if you dare.