At first glance Georgie the bearded dragon isn’t as cuddly as a rabbit or a hamster. But when Harry Dews came face-to-face with the rust-coloured reptile at his school in Wolverhampton, the 14-year-old couldn’t contain his delight. 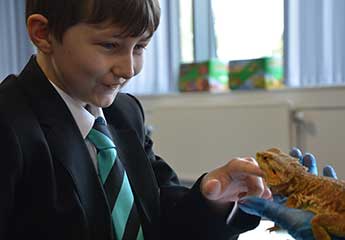 Harry, who has Asperger’s and suffers from anxiety, adores every kind of animal according to his mother, Jenn. When he came home after his encounter with Georgie – a meeting made possible by a National Lottery-funded project called HugglePets In The Community – it was all he could talk about.

Jenn said, “I honestly can’t thank HugglePets enough for what they’ve done. He was so happy, he was like a different child. The sessions have made him a lot calmer and a lot more focussed and he enjoys going to school more now.”

For children like Harry the chance to meet, touch and feed creatures like Georgie, rabbits Mabel and Millie, Ben the tortoise and Gary the giant African snail, is exciting enough. But the 50-minute sessions, held once a week for six weeks, have another purpose: enabling young people with anxiety and low mood to talk about their feelings.

Hannah Dixon, Community Projects Manager at Huggle Pets In The Community, said, “Often children can relate to an animal in ways that they can’t relate to a human, and being with them is a way of broaching conversations.” 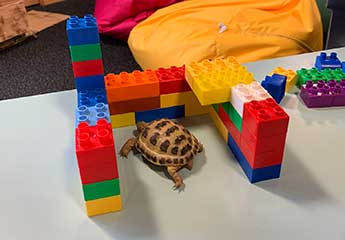 Each HugglePets In The Community session is delivered by an animal handler and a qualified psychotherapist who encourage the children to care for the animals. Hannah said, “Sometimes [the children] might be scared of the reptiles at first, but by the end of the week they’ll be handling them and feeding them. That can really help their confidence and raise their self esteem.”

Prior to the coronavirus, children visited HugglePets In The Community at its headquarters in Wolverhampton. But since September 2020, the organisation has been using funding from The National Lottery to take its small menagerie of animals into schools.

"That’s important", said Hannah, "because the pandemic has made some children frightened of going back to the classroom". She added, “We’ve had children that have decided after 5 weeks of our sessions that they’re ready to go back.”

Jenn said the sessions have certainly made Harry more excited about going to school. The teenager hasn’t had an easy time in recent months. He was devastated when KC, the family’s elderly golden retriever, died just after the start of the lockdown and – as a child on the spectrum – he reacted badly to an adjustment to his school hours introduced late last year.

Meeting Georgie and the rest of the HugglePets has done wonders for his confidence and he has a new enthusiasm for school.

Jenn said, “It was the last HugglePets session yesterday and he said ‘I’m going to really miss it, mum’. At one point he wanted to bring all the animals home, but I’m not sure I want a bearded dragon in the house!”

By playing the National Lottery you raise £30 million for good causes every week.