Lucas Norton admits that on occasion he has made a quick trip to the supermarket dressed as a Viking. 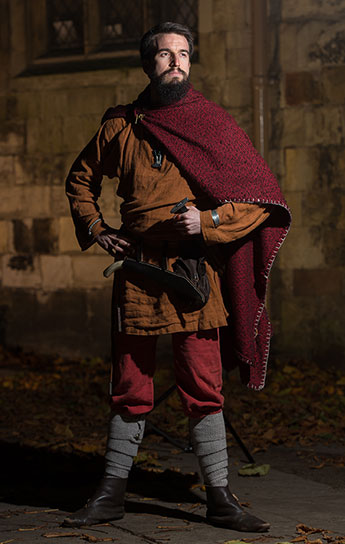 But the 31-year-old Visitor Operations and Training Host at the Jorvik Viking Centre in York insists most shoppers are relaxed if they come face-to-face with Norseman from the 9th century at the checkout. He said, “In York, people are used to seeing people dressed in weird and wonderful outfits because the city is so heavily involved in heritage and tourism. You quite often see Romans and Victorians wandering down the street, so a Viking in Tesco isn’t too much of an issue.”

You could argue that Lucas, who studied history at the University of York and has long been fascinated by the Vikings, has landed the perfect job. His alter ego is Kjartan (pronounced Kee-ar-tan), a Viking merchant who dresses in well-tailored robes and broadcasts his prosperity by wearing Viking ‘bling’ such as silver arm rings and a sword.

As Kjartan, Lucas gives schoolchildren, students and visitors to Jorvik a very human introduction to the world of the Vikings. And when the pandemic made face-to-face encounters impossible, Jorvik used funding from The National Lottery to take Kjartan online.

As well as delivering ‘Meet a Viking’ sessions for schools and home learners during the lockdowns, Kjartan was the saga telling skald (storyteller) at Jorvik’s first virtual Viking festival in February 2021.

The festival – also supported by National Lottery funding – was a huge success. The free live streams were watched by about 3,300 children across the UK and the pre-recorded sessions reached more than 12,000 people including students in Spain, Italy, Switzerland and Thailand.

The world’s fascination with the Vikings shows no sign of abating. Pop culture can’t get enough of the men in horned helmets with the Thor movies, the Vikings TV drama series and The Last Kingdom books – to name just 3 high profile examples – keeping them in the spotlight.

Lucas said, “The thing that makes the Vikings interesting is their sense of adventure. They get absolutely everywhere. They travel all over Europe, they reach parts of western Asia and North Africa and they were the first Europeans to cross the Atlantic to North America.”

The Vikings also enjoy a fearsome reputation, one that sometimes obscures their more playful side. Lucas said, “We sometimes imagine they were all about pillage and plunder and violence. But there are lots of fascinating things going on in their lives."

They certainly knew how to relax and have a good time. Archeological digs have found plenty of musical instruments and even games. Lucas said, “There’s one called Hnefatafl that’s a bit like chess. And they liked to go ice skating using skates made from the leg bones of cows and horses.”

When he appears to a young audience on video or webcam, Lucas tries to make Kjartan realistic, but approachable. Some of his colleagues adopt a Scandinavian accent, but Lucas prefers to use his own voice.

And yes, he’s had to field a few difficult questions from students who have seen the bloodthirsty side of the Vikings depicted in TV and film. He said, “One boy asked me how many enemies I’d slaughtered.”

When we all play a little, fun stuff happens.