Annie Aris knows the power of a good belly laugh even in the most tragic of circumstances. As a laughter therapist she is often called on to raise a smile on the face of children living with serious illness or disabilities, like Ted Lenihan (pictured). 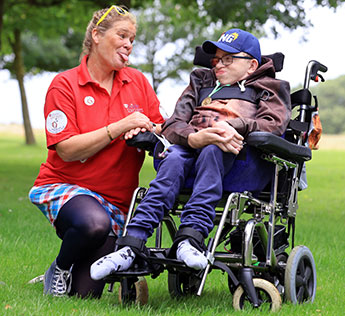 Annie’s conviction that laughter therapy can make a crucial difference to vulnerable children saw her become the first female clown doctor at Great Ormond Street Hospital for Children. In 2007, she co-founded a project called The Laughter Specialists that supports children across South East England by providing laughter therapy in hospitals, schools and hospices, as well as one to one sessions in families’ homes.

Annie got The Laughter Specialists off the ground with the help of National Lottery funding. Now, 14 years down the track, her unfailing dedication to her local community has seen her chosen as The National Lottery's Local Health Hero in The Sun’s Who Cares Wins Awards 2021.

She said, “Winning this award for the charity means that we’re out there, people know about us. All the team we work with behind the scenes, the volunteers, the fundraisers – they’re all going to be recognised for what they do.”

Annie’s approach to laughter therapy has evolved over the years. As a trained nursery nurse who has also trodden the boards in theatre and pantomime, she was well placed to bring laughter to vulnerable children. During a typical session she will use a combination of music, magic tricks and all manner of “horns and squeakers” to raise a smile. 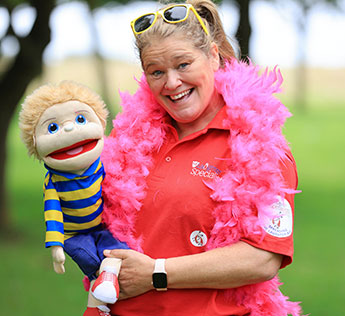 For Annie, bringing laughter to young children going through treatment or living with disabilities, not only helps brighten up their day, but supports their families too. When the family of a terminally-ill 7-year-old boy asked her to brighten his last hours, she didn’t hesitate. Annie said, “We’d worked with him for several years prior to that, so the family knew us. They called us in to make his last hours memorable and pleasurable and the little smiles we got from him were incredible. It was really poignant.”

Annie also said, “To see a child who’s poorly in hospital is tough on the children, but it’s also tough on the families and the people around them. When you see the child laugh it makes the adult relax a bit and opens up communication between them.”

Carly Hughes knows just how powerful laughter therapy can be. Annie worked extensively with her son Bobby, after he was hit by a car while playing outside the family’s home 5 years ago. Bobby underwent 3 rounds of brain surgery and Annie visited him in hospital and later when he was recovering at home.

Carly, 40, from Thaxted, said: “Annie was there right from the beginning when Bobby wasn’t talking or able to walk. It’s been very hard, so to bring a bit of laughter to the situation is fantastic. Without laughter, you’ve got nothing, have you?”

Bobby is now doing well and Carly believes Annie’s laughter therapy has played a part in his recovery. She said, “She always goes that extra mile.”

The National Lottery is the proud sponsor of The Sun's Who Cares Wins Awards 2021. You can watch the Awards on All 4.