Sean Welsh, 38, and Megan Mitchell, 27, have a passion for movies, Nicholas Cage and producing subtitles for diverse audiences. Their goal is to reduce the stigma around captions and ensure viewers who read them get as much out of the movie as possible.

Sean and Megan’s love of visual media has led them both to subtitling, but through different routes. Sean started his career working for a media company as a professional subtitler for TV shows. After a move into freelancing he set up Matchbox Cine, which he co-founded and runs with Megan.

His motivation comes, at least partly, from his brother Stuart, who has cerebral palsy and a mild developmental impairment. And while providing subtitles helps people with disabilities, Sean says that a huge number of people without hearing difficulties make use of them – including those learning English as a second language.

Sean said, “I’ve always loved films, I got taken to the cinema a lot as a child and we used to rent movies every week. I remember once when my dad played a trick on me – he told me we were going to see family but we were actually going to see Scrooged at the cinema instead.” He also has fond memories of his dad letting him stay up late to watch movies like The Sting.

Megan, like Sean, caught the film bug early. She said, “I was from a working class area in east Glasgow and hadn’t seen many films until a teacher took us to see a foreign language movie with subtitles. A week later I joined the film team.” 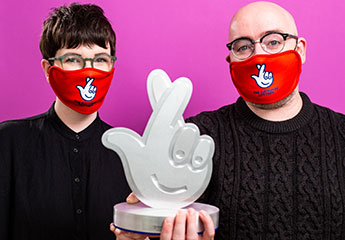 Both Sean and Megan are passionate about their work producing subtitles for movies. And thanks to support from National Lottery players, the pair have captioned 275 movies during lockdown. They have even worked online, training others how to produce effective subtitles.

They’re both in agreement about the need for good subtitles, which open movies up to more diverse groups. Sean said they’re looking to offer “an equality of experience” to audiences, which involves a mix of the script and describing what’s happening on screen. Sean said, “There are a lot of choices you make, what to include and what not to. You need to describe things that happen to give context for people with hearing difficulties.”

Megan is clear about her ambition too. She wants captions on more movies, not just special performances, at weird times, that don’t suit people who work. She said, “cinemas need to be brave. We want all people to be able to enjoy captions.”

Their amazing passion and hard work has won them a 2020 National Lottery Award for the Arts, where they were selected from 5,000 nominated projects from across the UK. This year’s awards recognise the ‘Lockdown Legends’ who have worked tirelessly to help others during this extraordinary year. Talking about their win, Sean said “I’m humbled and excited to have won, I’m a bit overwhelmed.” Megan said, “We’re in shock”.

As well as their amazing work subtitling and teaching others this valuable skill, Sean and Megan have also created their own film festivals like Keanucon and Cage-a-rama. These celebrations have proved incredibly popular and even resulted in an invitation to appear on the Graham Norton Show when Keanu Reeves was appearing.

Megan is a big fan of Nicholas Cage movies, with one in particular becoming a huge part of her life. The 1983 movie Valley Girl, directed by Martha Coolidge, features heavily – including in her masters degree thesis. Megan said, “It’s a teen rom-com based on Romeo and Juliet and it was transformative for me, it has real emotional resonance. I always come back to Valley Girl; it’s good feminist writing by a female director with a cool soundtrack.”

We couldn’t let a chat about movies with Sean and Megan go without asking for their hidden movie gem recommendations. Sean said, “John Pazis’ 1985 movie Crime Wave – it’s a Canadian movie that’s funny, dry and strange”. Don’t mistake it for the Sami Raimi movie Crimewave though, which came out in the same year.

Megan, of course, wants everyone to watch Valley Girl. But before you do that, you can also watch our (subtitled) interview with Megan and Sean.