From wheelchair to marathon, Michael is on a mission

When Michael, 24, was younger, doctors said he'd probably need a wheelchair for the rest of his life. As well as learning difficulties he has Down’s syndrome, a muscle condition called hypertonia and brittle bones. But for him, exercise has proven to be enormously beneficial and it’s made him a huge advocate for running. 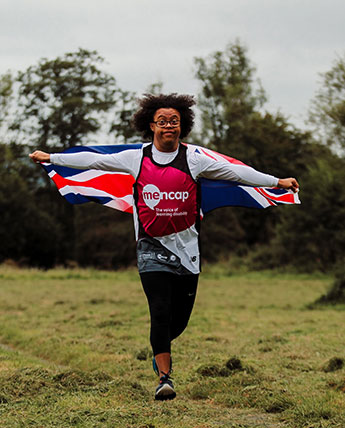 Michael said, “It was hard at the start.” But he began by running 100 metres, then 200, then 400. Now he’s ready to run 42.2km. Michael wants us all to go running and to get outside. He’s particularly passionate about people with learning difficulties taking part too.

Michael’s ambition was to run the London Marathon this year to raise money for National Lottery-funded Mencap but the coronavirus forced him to rethink. Rather than giving up he’s opted to run the full distance in 2.5km laps near his home in Amman Valley, Wales.

It’s going to be harder than the London Marathon too, as the route has a 134m elevation. Michael played this down, “Yes, it’s a bit up and down.” he said. His mum Erika added, “he’s a mountain goat.”

Michael has three tips for those of us who might struggle with a weekend parkrun, let alone a marathon.

3) Sprint for a mile then jog for a bit

He said, 'Running is free. I want to encourage everyone to do it.'

Of course, not being able to run with thousands in London is a blow. Michael said, “I’ll miss running with other people.” To compensate, he’s arranged for 16 others to join him for two laps each (maintaining safe social distancing and following government rules).

Michael wants to run for Mencap because the organisation has done so much to help him over the years. He said, “Mencap helped me with running, going to the gym and helped me set up my business.”

Michael’s business, COALPIT Welsh Cake, sells the traditional Welsh snack online but with a twist. His Welsh cakes are jet black. He said, “They would have been eaten by miners at work and they’d be black.” Michael keeps his recipe secret though, so if you want to try them, you’ll have to track them down on the COALPIT Welsh Cake website.