Paul, 72, grew up in St Lucia before moving to London where, in his 20s, he worked in the music industry and was involved in running club nights and promoting young, black music talent. Paul’s passion was Motown and through his work and social life he met legends like Aretha Franklin, Stevie Wonder and more.

Then in 2014 Paul was diagnosed with Alzheimer’s disease, an irreversible brain disorder that slowly destroys memory and thinking skills. It’s the most common cause of dementia in the UK. Paul also has diabetes so he can suffer a lot of pain, which means he spends most of his time stuck at home.

His wife Brigitte, 62, describes him as able to talk to anyone and the combination of his illness and the coronavirus lockdown has meant that they’ve been unable to get out and about much at all. 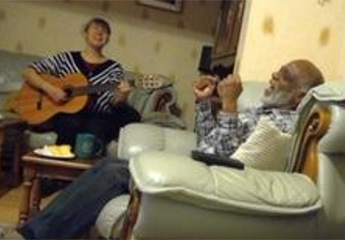 That's where National Lottery-funded project Mindsong and music therapist Misha Law come in. By pairing someone like Misha with people suffering from conditions like Alzheimer’s the project aims to help both patients and their carers.

When Brigitte first mentioned the idea of music therapy to Paul he was a bit resistant to it. So when they started the sessions Brigitte simply introduced Misha as “a friend of mine who happens to play music”.

Paul’s love of music remains a huge part of his personality and in his first few sessions with Misha she discovered he was most comfortable when they sang together. Exploring music, Misha and Paul discovered some of the songs he enjoyed most. These became their anthems, and are now songs they return to week after week.

Amazing Grace is one such song, which Misha says connects him to his time as a child. It brought back memories of his mum and he spoke of the admiration he has for her. Brigitte said, “Amazing Grace is part of Paul’s family, it’s part of the community.”

Paul also loves Stand By Me, a song which he connects to his time in London. When Misha sings he starts to dance. This is also a song that Brigitte loves and as they sing together, Paul’s face lights up with a big smile.

As Paul, Brigitte and Misha were nearing the end of their 10-week-long music therapy, the UK was entering coronavirus lockdown. However, having seen the amazing results of the therapy, Misha decided to continue fortnightly sessions via video calls. This has lifted Paul’s spirits. Brigitte said, “I am pleasantly surprised that the sessions worked so well for Paul; that in his mind, Misha was in our house. In fact, after one of the sessions ended, he asked me: ‘Has she gone? Did you take her to the door?”

Recordings of these calls have also proved important, with Brigitte replaying them for Paul when he needs a boost.

The therapy seems to have had an amazing impact on the lives of both Paul and Brigitte. After sessions his speech is more fluent and animated. Brigitte said, “The sessions act as a painkiller and antidepressant for Paul, and the impact can last for a week. They also offer him the feeling of having a social life.”

Lockdown has been a challenge for both Paul and Brigitte. The nature of Paul’s condition means he struggles to remember people he was once friendly with, especially with big gaps between seeing them, but Brigitte said, “He doesn’t forget Misha”.