For David Stanley music is “raw emotion” and performing it creates a sense of joy that is more important than ever in a world gripped by uncertainty and fear.

The transformative power of music is especially important for people with learning disabilities, a community that David, 43, has been working with for more than half his life. As the founder and CEO of The Music Man Project, a National Lottery-funded charity that teaches children and adults with learning disabilities how to play instruments and allows them to perform on some of the country’s biggest stages, he has done everything he can to keep the music playing during the pandemic. 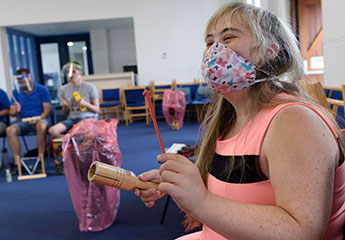 David said, “Put yourself in their shoes for a moment. If you have a learning disability, you rely on other people so much more than the rest of the population. So the pandemic means they run the risk of being isolated and their mental health will suffer as a result.

“If you can share the energy and emotion of music, it not only makes them feel better, it also gives them a way to vent. If I’m having a terrible day I can go to the piano and play some music and release everything. I’m trying to give that gift to my students.”

David’s tireless work was acknowledged when he was awarded a British Empire Medal in the Queen’s New Year’s Honours List. It recognised his long journey teaching music to people with learning disabilities – a journey that began in 1999 when he began tutoring a friend with Down’s Syndrome and grew into a project that staged a spectacular concert at The Royal Albert Hall in 2019 featuring an orchestra and 200 Music Man Project students.

He is immensely proud of the honour, which, he says, will make him work even harder to teach music to people across the UK as well as a growing number of other countries. 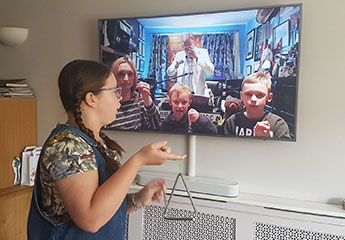 The pandemic has made his job much harder, of course. But the Music Man Project moved swiftly to replace face-to-face lessons and concerts with online sessions delivered via Facebook, Zoom and WhatsApp.

David also spent hours calling his students in person. He said, “I’d play the piano to them and we’d sing some songs. Then I’d ask them how they were feeling. As good as that was for the students themselves, it was their family members and carers who really appreciated it – it gave them a bit of a break. It’s like a pressure cooker for some of these families because they’re providing 24-hour care and there’s no respite.”

The National Lottery has played an important role in the Music Man Project’s story. You might have spotted some of its students performing in our 2019 TV ad celebrating our 25th anniversary.

During the pandemic, the charity was given funding from The National Lottery’s £600MMillion coronavirus emergency fund to help it buy instruments for people with learning disabilities across the UK. They used them to play along in online lessons and recitals.

Those sessions have enabled the Music Man Project to reach a far wider audience than it did before the pandemic. For David, it’s a ray of light that points to a brighter future. He said, “I believe opportunity is hidden in every moment, no matter how dark they seem.”