The Move Dance Feel classes led by Emily Jenkins look, at first glance, like any other contemporary dance tutorial. But the women taking part are either living with cancer or are in remission following treatment.

Dance and health specialist Emily, 32, began working with women affected by cancer in 2016. Having worked previously with older people and people affected by dementia, she was convinced dance could offer not just physical benefits, but also a significant boost in participants’ wellbeing. 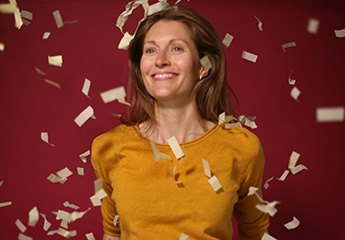 Emily said, “The amount of research we have gathered to evidence the benefits is phenomenal. Dance helps women [affected by cancer] physically, mentally and socially, allowing them to reconnect to their body and feel more energised, more joyful and less anxious.”

Prior to the pandemic, Emily was leading Move Dance Feel sessions in Bristol and London. She and her team of 7 instructors moved the classes online with the help of National Lottery funding and they now work with about 200 women across the UK.

Emily said, “We’re reaching women we weren’t able to reach before. People in rural locations with no centres or support nearby and women we were connecting with in the cities whose health has deteriorated, so they can no longer travel to a class.”

Emily said she was amazed to learn she had been nominated by some of the women participating in her classes. She was even more astonished to learn she had won the National Lottery Award. She said, “It’s wonderful, a real surprise. It’s humbling to know the women value it and the work that goes into it. And it’s also great to get some recognition for the power of dance in this context.”

Choreographer and theatre director Dame Arlene Phillips travelled to London to present Emily with her award and to congratulate her on her incredible achievement. Dame Arlene said, “Emily is a real inspiration to the dancing community. The work that Move Dance Feel does to help women living with cancer is absolutely vital, and it just shows how you can lose yourself in the moment with dance – especially for those going through such big life changes.”

Emily began ballet classes when she was 4 and switched to contemporary dance in her teens. As an adult, she developed a practice using a fusion of styles to boost physical and mental health. Having had family members and close friends affected by cancer, she was convinced dance could offer similar benefits to women affected by the disease. 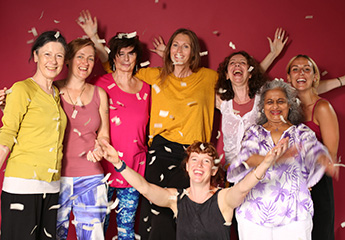 She said, “Cancer treatment has a huge impact not just on the body, but the person’s relationships and spirituality. Their sparkle can be lost because it’s an overwhelming, traumatic experience. There’s a huge amount of evidence that physical activity is beneficial for people undergoing treatment and recovering from cancer, so I couldn’t fathom why no one was offering dance.”

Since the first Move Dance Feel session was held in East London in 2016, Emily - a graduate and staff member of London-based music and dance institute Trinity Laban - has conducted 4 studies into its effects. They showed 86 percent of participants felt the classes had a positive impact on their stress and anxiety, 46 percent had clinically improved levels of fatigue and 96 percent reported that dance improves their mood.

Despite the demands of running the project, Emily continues to lead Move Dance Feel sessions as often as possible. She said, “It’s the one thing I’m reluctant to give up. My greatest joy with the project is dancing with the women and feeling so inspired by the energy they give back and the delight they get from dance.”