Every morning Maxwell Ayamba leaves his home in Sheffield and heads to a place he knows and loves: the Peak District National Park. It’s a chance for the 56-year-old journalist, academic and community activist to stretch both his legs and his mind.

Maxwell said, “To me walking is medicinal – I see it as the best therapy for physical and mental wellbeing. When I walk I feel a sense of freedom and it gives me time to reflect and think. It’s a feeling known as biophilia – the innate human instinct to connect with nature and other living things.”

Growing up in rural Ghana, Maxwell was taught to revere nature and act as its custodian. But when he moved to the UK in 1996 to study journalism at Cardiff University, he soon became aware that very few people from the BAME community spent time in the countryside and the environmental movement suffered from a lack of diversity.

Not one to shy away from a challenge – he was the first black person to work on Sheffield’s tram network when he moved to the city to study for a postgraduate degree in environmental management – Maxwell and 2 friends set up a group called 100 Black Men Walk for Health. It gave middle-aged black men the chance to get out into nature, exercise and talk without inhibition.

He said, “The motto of the group was ‘walk and talk’. We wanted to give freedom to middle-aged black men to just share their thoughts because mental health is a big issue in our community and something of a taboo. The group was a safe space where men could share their problems in a way they were unlikely to do at home.” 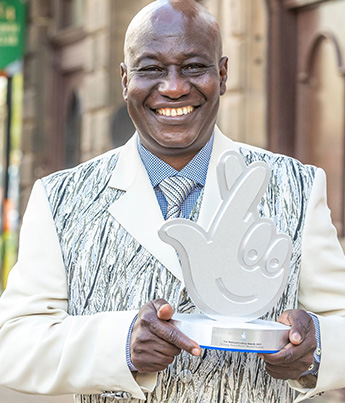 Maxwell has changed the name of his walking group to Walk4Health because women, younger men and members of the Asian community are increasingly getting involved. In 2016, he founded a charity called the Sheffield Environmental Movement (SEM) that is supported by National Lottery funding and promotes access to and participation in the natural environment for people from black and ethnic minority communities.

Maxwell’s tireless efforts to increase access to the countryside for members of the BAME community has won him the Heritage category at the 2021 National Lottery Awards. The Awards are the annual search for the UK’s favourite National Lottery funded projects. They celebrate the ordinary but inspirational people and projects who do extraordinary things with National Lottery funding.

Maxwell believes winning an award in 2021 is particularly significant. He said, “To me it’s a great achievement, especially in the context of the pandemic that has disproportionately affected black communities due to a lack of access to quality green spaces and countryside. So winning this award demonstrates the importance of the work I’m doing to promote greater access to nature and green spaces for people’s health and wellbeing.”

Maxwell was presented his award by the journalist, newsreader and presenter Clive Myrie. Clive said, “Maxwell is an outstanding example of a community champion and he’s done some incredible things for people in Sheffield, having organised everything from guided walks to horse riding classes. Connecting with the outdoors is so important for our health and wellbeing, so it’s great to be supporting such a worthwhile cause.”

Sharing his love of the countryside with others is as important as ever to Maxwell. He said, “I get joy from seeing people happy and sharing the benefits of nature with them. I call it the Natural Health Service and I’m passionate about preventative cures – doing this to prolong life. Just the act of getting a bit of vitamin D makes a huge difference.”