Lauren Price, the Welsh boxer who won a gold medal at the Tokyo 2020 Summer Olympics, has been crowned Olympian of the Year in the 2021 National Lottery Awards. 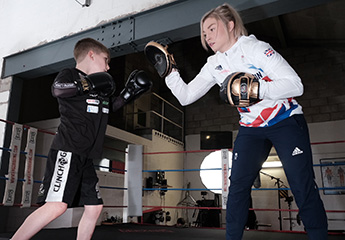 The 27-year-old was presented with the award at Pontypool Amateur Boxing Club where her amazing career began. It was handed to her by her grandmother, Linda Price, who with her late husband Derek, raised Lauren from an early age and encouraged her love of sport.

Lauren said, “I don’t know where I would have been without the support of my grandparents. Everything I’ve achieved, I dedicate to them for all the support they have given me and I’m delighted my Nan is here to present me with this award today.”

Lauren also thanked National Lottery players for their amazing support. She said, “I am absolutely honoured and thrilled to be announced as the first ever recipient of the Olympian of the Year Award and I would like to thank all the members of the public who voted for me. A lot of what I have achieved is thanks to The National Lottery for supporting me as an athlete. The funding has allowed me to focus on what I love doing and to reach my full potential.

"The National Lottery has supported thousands of athletes like me throughout our careers and the funding allows us to compete and train full time and access world-class facilities and training programmes.”

Speaking at the award ceremony Linda Price said, “I’m over the moon for Lauren. She’s worked so hard all these years and deserves all the recognition that comes her way. I feel honoured and proud to present her with this award.”

Lauren, from Ystrad Mynach, near Caerphilly, is among more than 1,000 elite athletes funded by The National Lottery through UK Sport’s World Class Programme. The programme allows athletes such as Lauren to train full time, have access to the world’s best coaches and benefit from pioneering technology, science and medical support. 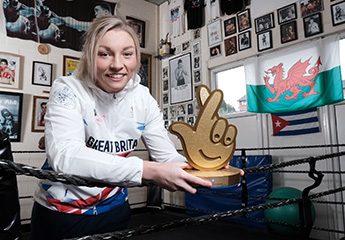 Lauren showed a keen interest in several sports from a young age, most notably football, netball, taekwondo and kickboxing. But the sight of boxer Nicola Adams (another former National Lottery-funded athlete) winning gold in the London 2012 Olympics inspired her to focus on boxing.

After picking up gold medals in the middleweight class at both the 2018 Commonwealth Games, the 2019 European Games and the 2019 World Championships, her decision to make the switch paid off with a place at Tokyo 2020.