How daily runs helped Chris cope with losing his parents

Ask Chris Sellar how he feels about winning the Sport category at the 2021 National Lottery Awards and he declares himself “a wee bit embarrassed”. 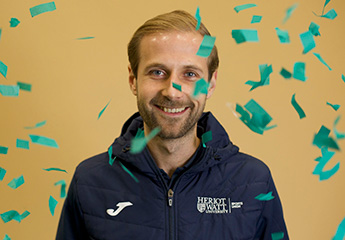 The 30-year-old said, “There are lots of people doing incredible things. I just went running for 28 days to look after my mental health.”

But Chris’ 28-day challenge – a project that raised more than £20,000 for charity – is only a small part of his extraordinary story; a heartbreaking tale that began in January, 2018 when his father, Robin, was diagnosed with bowel cancer.

A few months later, Chris and his family received devastating news: Robin had stage 4 cancer and had months to live.

Chris said, “That was like a train hitting you. My dad was only in his late-50s and was fit and healthy. He was working part-time and swimming, playing tennis and doing pilates - all the things you’re supposed to do.”

Chris turned to running to give his mind a break from worrying about his father. Listening to music as he pounded the streets of Edinburgh was a way of “processing stuff and escaping”.

Robin survived for a further 18 months and father and son made the most of it. They bought season tickets for the Hearts football club and enjoyed the weekly matches. But it soon became clear that Chris’ mother, Hilary, was struggling to deal with her husband’s diagnosis.

In the summer of 2019, shortly before Robin died, Hilary was admitted to hospital because her weight had plummeted to 6 stone.

After Robin died in September 2019, Chris and his younger sister devoted themselves to helping their mum. They thought they were making progress; her mental health appeared to be improving. But on 28th January 2020, Hilary took her own life. 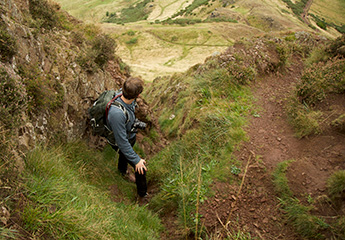 Chris said, “The loss of mum in the way we lost her was devastating – you almost can’t describe how you feel. It was utter shell shock. The morning after it happened I couldn’t speak. I was so emotionally numb I couldn’t process anything at all.”

Desperate to improve his own mental health and distract himself from his grief, Chris turned once again to running. He took part in the Inverness half marathon about 4 weeks after his mother’s death and broke down in tears at the finish line.

As the first anniversary of Hilary’s death approached, Chris realised he needed a way to cope with his feelings. He said, “That was the anniversary I was most fearful of in terms of its impact. With a death through suicide you question everything that happened and you’re trying to piece together a puzzle that you’ll never piece together.”

Chris decided to run 10km every day for 28 days. It was a distraction, a way to improve his mental health and a means of raising money for 2 charities – Survivors of Bereavement by Suicide (SOBS) and Back Onside, a charity supported by funding from The National Lottery that uses sporting activities to help people with mental health issues.

Victoria said, “I have always been a strong believer that physical and mental health go hand in hand. I know myself how important sport is in dealing with the stresses that life throws at us. Chris is an outstanding example of harnessing the power of exercise to boost wellbeing.”

Chris said, “I did all the 28 runs and got a personal best on the last day. The only thing we weren’t able to do was a big group run due to Covid. So we challenged people to walk, run or cycle 10km instead and tag me on social media.”