Mariama Sanneh was just 7-years-old when she experienced religious discrimination, an event made all the more challenging because the person responsible “was someone who looked like me and came from the same background”.

The Bristol student said, “I was in Year 3 at school, when one of my fellow Muslim students left a note in my little drawer that said: ‘You're going to hell because you don't wear a hijab’. It made me realise from a young age that growing up in a society where you're black, female and Muslim, there are going to be many different struggles that you are going to have to face.”

Mariama has also seen her parents, who came to the UK from Gambia, face racism. Likewise her sister, who works in social care, has had people refuse to work with her because of the colour of her skin.

These experiences have inspired Mariama, 15, to become an activist devoted to tackling issues such as racism, sexism and xenophobia. Working closely with Integrate UK, a National Lottery-supported charity based in Bristol, she takes every opportunity to help empower young people to transform society in a positive way.

Mariama, who was presented with her award by Integrate UK project manager Amaal Ali, said she was shocked, but delighted to be named Young Hero. She said, “I really wasn't expecting it but it’s good that what I'm doing is being recognised. I'm so passionate about the stuff I'm doing, I don’t even need an award. I'm really grateful to The National Lottery and to Integrate UK because it has given me the opportunities and exposed me to many different things.”

Mariama’s activism began at the age of 13 when she joined an Integrate UK scheme called Project Fearless. Its main aim was to create an educational video called Vitriol that addressed Islamophobia and far-right extremism. Mariama was involved in every aspect of the project including developing the story, writing the script and acting in the video. Vitriol has had almost 10,000 views on YouTube and is used to deliver peer education workshops nationally. Mariama has delivered some of these workshops in her own school, reaching 200 students. 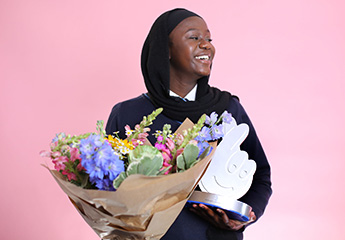 She said, “From that point on I realised I could make a difference.”

Since then, Mariama has been involved in several more Integrate UK projects. They include the animation – Hijabs and Miniskirts – and the music video for Stand in Pride, a song challenging homophobic views. She also sits on the With and For Girls task group and works with activists internationally to help meet the needs of young women across the world.

As if that's not enough, the extraordinary Year 10 student is making use of her expertise at school too, where she is the lead representative on its youth-led Equalities Council. As a result of her work, the school added more writers of colour to the Key Stage 3 writing list along with hidden historical stories of World War Two soldiers from Indian and African heritage.

Mariama said, “We also included changes to the bullying policy that included harsh implications for any act of sexual harassment, racial slurs, or any other element of gender and racial inequality.”

In light of all these achievements it’s easy to forget that Mariama is also sitting her GCSE exams this year and has plans to go to university, so she has to be careful to keep enough time to focus on her school work.

Amaal said it was no surprise that Mariama – who is now a junior trustee at Integrate UK – was selected for the National Lottery Young Hero award. Amaal said, “When she joined us she was a lot more reserved, but she’s become a powerful mentor for young people. She’s very compassionate and she likes to listen to what people have to say.”