How Katherine dug deep to save a miners’ hospital

Katherine Hughes was widowed in 2018 and lost her mother the following year. So, when the pandemic struck, the 72-year-old from Caerphilly in Wales knew she ran the risk of becoming severely isolated.

Fortunately, Katherine had a passion project to keep her focussed through the lockdowns. As the secretary of Caerphilly Miners' Centre for the Community – a former hospital she worked tirelessly to save from the bulldozers – Katherine was kept busy making sure the Centre continued to offer as many services as possible within the rules. As well as helping run the building, she also leads chair exercise classes for people with limited mobility. 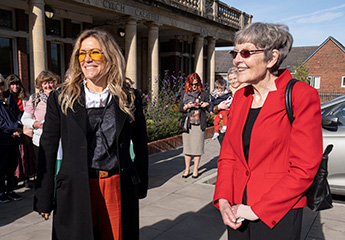 Katherine said, “If it hadn’t been for the Centre and having things to do, I would have felt totally isolated. Like many people in my community, particularly those who live alone, I’ve found the pandemic very tough. You need purpose, motivation and the opportunity to do things to get by.”

Katherine’s unstinting work to save, develop and help run the Miner’s Centre – a building supported by 4 National Lottery grants between 2013 and 2021 – has seen her win the Community and Charity category at the 2021 National Lottery Awards. She was presented with her award by the musician, author and broadcaster, Cerys Matthews MBE.

Cerys said, “Katherine is a shining light, a remarkable community champion as one of the driving forces behind saving this historic local landmark for future generations.”

Asked how she feels about winning the award, Katherine said, “I think it’s absolutely amazing; I was completely gobsmacked when I was told. I know my community appreciates me, but I actually appreciate my community, so this is something that’s really nice to share.”

The building Katherine helped save – The Beeches – was originally a mansion built by a wealthy mining contractor. In 1919, it was bought by mine workers from 29 pits, who clubbed together to raise the money via weekly contributions from their wages. Converted into a hospital devoted to treating miners who suffered industrial accidents, its remit was gradually extended until it became an NHS hospital serving the whole community.

In 2006 it was announced ‘The Miners’ was likely to close as a result of the reorganisation of health services in South Wales. Katherine, who had recently completed treatment for cancer, was determined to save the much-loved building from demolition. Using the experience gained as a town planning consultant, she began to build a case for using it as a community hub.

Her first step: going door-to-door and asking her neighbours what they thought about the community hub idea.

She said, “Lots of people said ‘we need this; let’s go and find a way to get it’. The idea was to follow the ethos of the miners: mutuality, self-help and collaboration.”

Katherine’s indefatigable work eventually secured the community a 99-year lease for the building which opened as the Caerphilly Miners’ Centre in 2015. Today, it offers a range of classes and activities for all ages, from chair exercise and language lessons, to gardening, baby clubs and its social group for older people, Elderberries.

Katherine said her involvement in the Centre is “like a full time job”, but “it motivates me and gives me a reason to get up and out”. She added, “I’m so proud of how far we’ve come and the community we’ve built.”