Learning to cycle at 64 gets Marion pumped up

Marion Webster learned to ride a bike at the age of 64 and has a simple message for others tempted to get in the saddle: it’s never too late.

She said, “It’s been a fantastic experience. At first I was wobbling and was frightened all the time. But after I got more confident I’d come home from a ride elated and my husband would say ‘we should bottle that’. It felt like a real achievement at my age.”

Marion, now 66, became pedal proficient at WAVE Adventure, a Bolton project supported with National Lottery funding. Its beginners’ riding course transformed her from a nervous cyclist who took the occasional tumble, into a confident rider who regularly enjoys the 10 mile return journey from Bolton to Bury.

She said, “WAVE Adventure welcomed me with open arms. I told them my age and said I was new to cycling and they said ‘it doesn’t matter. We’re here to help everybody’.”

Marion, who grew up in Bolton in the 1950s with 5 brothers and sisters, didn’t learn to ride a bike as a child. She said, “there were simply more important things to spend money on than a bike.”

Later in life she became something of a fitness fanatic. She went to a gym regularly and was a passionate runner. But after completing a half marathon at the age of 62, she suffered a knee injury that stopped her in her tracks.

She said, “I had to have a knee replacement. Afterwards I did physio and got into walking and swimming, but when the first lockdown struck I found myself stuck in the house. All I could do was go on little walks with my dog.” 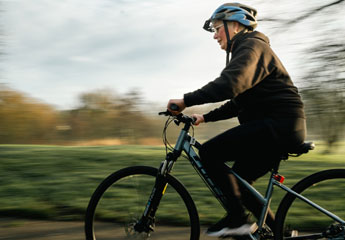 When she told her son she always wished she’d learned to ride a bike, he encouraged her to go for it. He even loaned her his wife’s bike as an incentive.

Marion said, “My son offered to buy me my own bike for my 65th birthday if I learned to ride. So I set out to teach myself on cycle paths near my home. I was falling off and getting bruised, but I wouldn’t give up.”

One day, Marion met another cyclist who told her about WAVE Adventure. Since completing the project’s riding course at its Bolton Hub, she has continued to go on its Wednesday group rides that stick to cycle paths and quiet country roads.

She said, “As well as learning riding skills I’ve been taught some basic bike maintenance. It’s a brilliant place!”

True to his word, her son bought her a “shiny new bike” for her 65th birthday.

Marion said, “I thought I’d left it too late and I hadn’t. Learning to ride has been a brilliant experience.”