History and cutting-edge research go hand in hand at Jodrell Bank, a place where visitors learn as much about the power of human ingenuity as they do about pulsars, quasars and other astronomical phenomena.

The Observatory’s Lovell Telescope – a giant 76.2-metre dish – has been probing the depths of space since 1957. The structure has become a familiar landmark on the Cheshire Plain and the Observatory was made a UNESCO World Heritage site in 2019.

But did you know the gears that allow the telescope to turn came from World War 1 battleships or that its receiver is cooled to about 10 degrees above absolute zero to create the purest signal possible?’’

Professor Teresa Anderson, Director of the Jodrell Bank Discovery Centre, said the telescope’s brilliant design has kept it at the forefront of research. She said, “The shape of the dish is a paraboloid and its simplicity has made it very, very useful. It’s a kind of phoenix structure that is constantly being updated and reborn with improvements in electronics.” 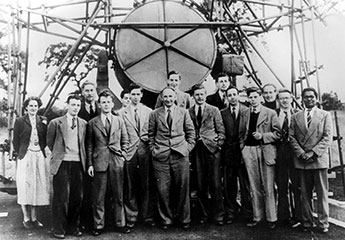 Visitors to the Observatory’s Discovery Centre learn the facility was built on Cheshire Plain instead of Manchester because interference from the city’s electric trams was disrupting the work of Sir Bernard Lovell, the scientist after whom the telescope is named. You’ll also discover that the site of this technological marvel was created by teams of men using little more than buckets and spades.

The Observatory is looking forward to revealing even more of its amazing story when the First Light Pavilion – a stunning building set to open in late 2021 or early 2022 – is completed. The Pavilion, which will house an exhibition gallery, education areas, a projection space and a new café, has been supported by £12.1MMillion made possible by National Lottery players. 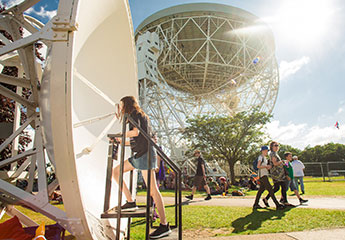 Professor Anderson said the ambitious First Light project would “absolutely not” have happened without National Lottery support. She said, “We’re so grateful and so aware of the great honour of it. It’s going to completely change how we welcome people to the site.”

National Lottery Open Week was your chance to grab free entry or an array of special offers at all sorts of fascinating places including the Eden Project, Wembley Stadium, Stonehenge, St Fagans National Museum of History, Catalyst Arts, Falkland Palace and many, many more.