When Micky Yule won a powerlifting bronze medal at the Tokyo Paralympics he wrote the latest chapter of an incredible story. 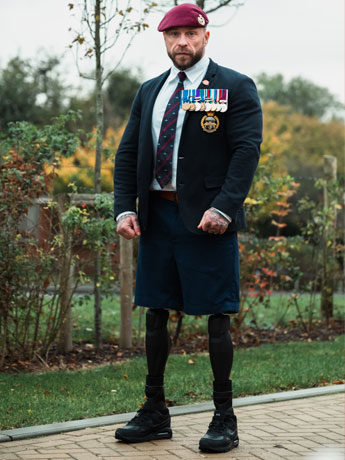 The 42-year-old lost both legs when he stepped on an improvised explosive device in 2010 while serving with The Royal Engineers in Afghanistan. Turning to sport to aid his recovery, he has worked his way into the highest echelon of Paralympic powerlifters.

But if you ask the 42-year-old former soldier to name the biggest challenge he faced in the run up to the Tokyo Games it has nothing to do with feats of strength.

Micky, who has two children aged 6 and 14, laughed and said, “The kids were off school and I found the homeschooling side of things really difficult. I don’t think I’ve ever held teachers in such high regard. That’s a tough gig!”

Juggling lessons and weight training sessions in the garage next to his house in Southampton, means Micky maintained his strength rather than increased it during the lockdowns. Even so, he proved he had the right stuff in Tokyo.

After finishing 5th at the 2016 Rio Paralympics, Micky clinched bronze in Tokyo after lifting 182kg. The gold medal went to Malaysia’s Bonnie Bunyau Gustin who hoisted a Paralympics record of 228kg.

Like every elite athlete who competes as part of Team GB, Micky is supported by funding from The National Lottery. He said the funding made possible by players like you played an essential part in helping him win a medal in Tokyo.

Micky said, “I wouldn’t have been able to commit to full time training without that support. It helps fund the coaches, the physios and the service staff. I don’t see how Paralympic sport could exist without The National Lottery.”

A big part of that support is delivered at Loughborough University where Micky trains with his coach and support team for two weeks each month. He said the coronavirus made a significant impact on the way sessions were conducted. 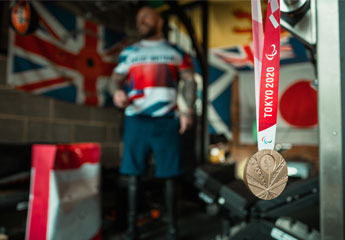 Micky said, “With disabled athletes we need plenty of one-to-one contact. If I’m being passed a 60kg dumbbell my coaching staff have to be right next to me. At times during the pandemic they had to wear visors, aprons, gloves and masks. They were sweating like crazy!”

Micky’s sporting journey began when he turned to powerlifting as a way to recover from the injuries he sustained in Afghanistan.

He said, “I watched the London Paralympics from the crowd and made myself a promise that the next time there was a Paralympics opening ceremony I would be at it. And that was it.

By playing The National Lottery you raise over £30MMillion for good causes every week.