Just over 10 years ago, Sarah Webb was trying to feed her newborn baby when she noticed an uncontrollable shaking in the left side of her body. She couldn’t stop her baby’s head from rocking but put it down to being a young, exhausted mum to her 2 kids – a newborn and a toddler.

She said, “I was relaxed, I wasn’t stressed, I was trying to give him his milk and I had no idea why that was happening – at the time I thought ‘gosh I’m just tired, I need more sleep’.”

But when the shaking persisted, Sarah sought help from her GP. Her whole life changed when she was diagnosed with Young Onset Parkinson’s at just 39-years-old. Parkinson’s is a degenerative disease that affects the brain and causes shaking and stiffness that get worse over time. Recalling the prognosis, Sarah said, “I was in complete shock for about a year. It is a horrendous day when you are told you have Parkinson’s; you have no idea what to do. I thought it was an old person’s disease, I never knew someone my age could get it.”

Disheartened by the lack of support and social opportunities for people with Young Onset Parkinson’s, Sarah set up her own initiative – the South London Younger Parkinson’s Network (SLYPN) – to create a community for young people to meet up for a drink in the pub or to go out for dinner. Then out of the blue, Sarah received an email from dancer and choreographer, Simone Sistarelli, asking if Sarah would be interested in bringing people together to his Popping For Parkinson’s sessions – a National Lottery-funded project transforming Parkinson’s patients into hip hop dance students.

Simone, who set up the project after his grandfather’s own experience with Parkinson’s, uses classic breakdance styles to ‘pop’ muscles and help people with Parkinson’s to take control of their body and channel their shaking.

Sarah went to the first session about 4 years ago and hasn’t looked back. She said, “As soon as the music goes on, somehow your body comes alive. It becomes like it used to be. It distracts the brain with the music; you move to the beat and it is amazing what your body can do.” 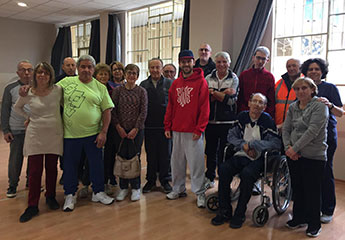 She added, “It is so freeing, it gets all of your worries and your issues away and you are just there dancing in the middle of a dance hall. Everyone walks out of those sessions with a new lease of life after an hour of popping. We come out feeling alive again, like we can rule the world.”

Simone says The National Lottery funding enables him to offer the empowering dance classes free of charge. He said, “It allowed me to keep transforming Parkinson's patients into popping dance students, turning a symptom into a superpower,” adding “The impact this project has is so powerful it sometimes feels magical. When you are battling with an incurable and degenerative disease and it feels like everything is falling apart, having a free project such as Popping For Parkinson's allows you to fall in love with life again."