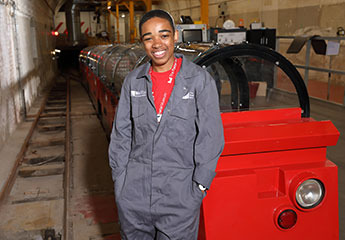 As a driver at The Postal Museum – a National Lottery-funded attraction that opened in September 2017 – Abel gets to spend one day a week piloting groups of visitors around a looped track 70-feet beneath the London streets.

Abel said, “It feels more like fun than an actual job. I like talking to visitors and answering their questions and I even love the smell – a mixture of damp, dust and underground London.”

The enjoyment Abel gets from driving a train beneath London’s streets is a great example of the fun, unexpected things that happen with the help of National Lottery funding. Or, as a new National Lottery campaign puts it: When we all play a little, fun stuff happens.

The 2-foot narrow gauge electric railway – or Mail Rail as it is known – was built to transport letters and parcels beneath the crowded streets of central London. It opened in 1927 and operated for 76 years before closing in 2003.

Abel spotted an advertisement for drivers prior to the museum’s opening in 2017, was accepted and embarked on the “rigorous training programme”. Abel said, “We have to pass exams and you have to complete a certain number of hours driving loops with a qualified driver.”

The museum and its railway have been closed again in recent times due to the pandemic. But The National Lottery Heritage Fund stepped in again, helping offset the impact of lost ticket sales with £250,000 of funding. 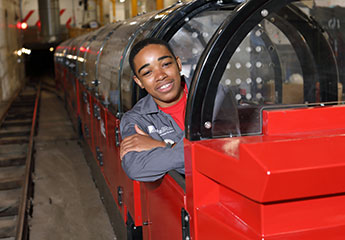 The Postal Museum is due to reopen on 20th May and Abel can’t wait to get back behind the wheel – or rather joystick – of the little electric train.

The sights and sensations of passing through the tunnels isn’t the job’s only appeal. Abel is a self-proclaimed heritage buff who is fascinated by every aspect of Mail Rail’s 100-year history.

Abel said, “Mike, one of the other drivers, used to work on Mail Rail when it was operational. He’s written a book about it and he always has stories to tell.”

Abel is also fascinated by the objects left behind when the railway ceased operation in 2003. Some of them – old newspapers, notepads and uniforms, for example – are displayed on the 2 platforms open to visitors. They can also see some of the original Mail Rail locomotives sitting by the side of the track.

Abel’s love of heritage has seen them take up a position at another National Lottery-funded site, Windmill Brixton, as the windmill’s Lead Miller and demand for its wholemeal flour has never been higher thanks to people taking up baking during the pandemic.

Abel is also studying fine art at a London university, but says subterranean train driving, flour milling and art aren’t as disparate as they sound. Abel said, “In a weird way art is the thing that allows me to do these other things; it’s a subject that unites my interest in unusual things.”