David brings his ancestors to life at Quarry Bank

For David Higginson the story of Quarry Bank, a textile mill and village built in Cheshire in the early part of the Industrial Revolution, is deeply personal. 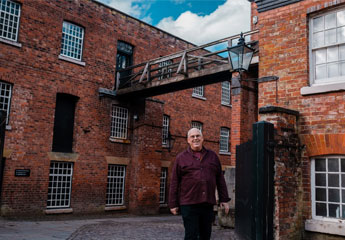 When the 69-year-old walks down a cobbled street in the village, or stands in Quarry Bank house, the grand residence once occupied by mill owner Samuel Greg, his thoughts often turn to his ancestors. One of them, Charles Crout, an orphan from London who was brought to work at the mill at the age of 10, was David’s great-great-great grandfather. Charles married twice, became an overseer at the mill and spent the rest of his life living and working at Quarry Bank.

David also has fond memories of boyhood visits to No. 12 Oak Cottages, the small brick house in Quarry Bank’s Styal village, where his great grandmother Lavinia lived with 5 of her children including Ernie, David’s grandad. He said, “I grew up about half-an-hour’s walk from Quarry Bank and my dad would take me to my great grandmother’s cottage. Ernie would take us round the fields and we’d collect mushrooms. Once he found a duck’s egg that we took home and I ate for lunch."

David added, “I feel a real connection to the place. If I could buy a house in the village I’d move back there tomorrow. I’ve got so many memories of playing in the woods near here as a child – it’s my happy place.”

Fortunately, he has found a different way to spend time at Quarry Bank: he’s a volunteer at the National Trust site. The former retail worker began guiding visitors at Quarry Bank in 2017, the same year an ambitious £9.4MMillion restoration of the mill, the cottages and various other buildings began with the support of National Lottery funding. 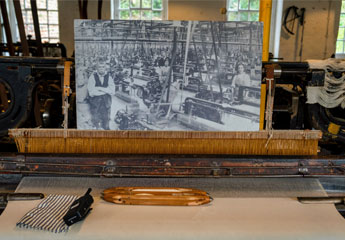 The project transformed a place renowned as the most complete designed Industrial Revolution community in the world. Visitors can now understand what life was like for mill owners, mill workers and apprentice children like Charles Crout at a time when society was on the brink of monumental change.

David can’t wait to welcome more visitors to a place that has shaped his life. In particular, he recommends a visit to No. 13 Oak Cottages – the house next to the one once occupied by his great grandmother – which is much as it would have been in 1900.

David said, “They were knocking a lot of the cottages together in the 1960s and the lady who owned No. 13 refused to let them touch it. It still has gas lights and a cooking range.”

Visitors will also get a strong sense of the past when they visit Quarry Bank House. It has been restored to the way it would have been in 1815, when Samuel Greig and his family were in residence. David often guides visitors in the grand building and wonders if his ancestor, Charles, was ever allowed inside.

He said, “When I was a boy, I wanted to look around the house, but it had a sign saying ‘private’ on the gates. One day the gates were open, so I walked to the front door, but a woman came out and told me to leave. I’ve always remembered that story because I suspect the same thing would have happened to Charles.”