How Comfort made her peace with football

When Comfort Etim looks back at her extraordinary life she admits that football – the game she fell in love with as a child growing up in Nigeria – has been responsible for some of the brightest and darkest chapters.

Comfort lives in Liverpool and is the coach of a National Lottery-funded women’s team that includes refugees and asylum seekers. As a former asylum seeker herself, the 37-year-old offers her players empathy, support and advice as well as tips on handling the ball.

She said, “They [the players] are amazing and I’m privileged to know them. For them to be going through the things they’re going through and still want to play football is just extraordinary.”

In London Comfort was met by a woman who took her passport – she said she needed it to obtain a US visa – and took her to a flat on a London council estate.

After two months sleeping on the living room floor Comfort was told she had to leave. Destitute, without a passport and speaking little English, she was forced to beg for spare change under a bridge in Brixton in South London.

In 2004, she became pregnant with her son, Ezekiel, and moved to Liverpool. For several years she kept her ability as a footballer a secret and tried to forget about the game. It had become a source of shame, she explained, because her Nigerian family couldn’t understand why she wasn’t in America making a success of her life.

After obtaining a Level 2 coaching certificate, she became determined to use football to help other women seeking asylum in the UK. She said, “I knew the struggle they were going through and I wanted to be able to support women - single mums in particular – by offering them a way to just relax and have some fun.” 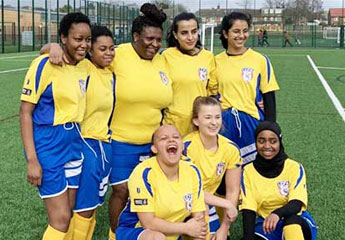 The team has had to suspend its twice-weekly training sessions due to the coronavirus, but the members are supporting each other via social media and phone calls.

Comfort is eager to resume training and her passion for football is stronger than ever. She said, “Football has always been in my heart. It’s the thing that makes me smile and gets me excited.”