The first coronavirus lockdown was a challenging experience for most people. But for Steph Castelete-Tyrrell, a 26-year-old from Northampton who has muscular dystrophy, its impact was so profound it inspired her to make an award-winning film.

Steph’s illness, combined with a range of associated conditions including respiratory problems, required her and her family to isolate to protect her. Steph said, “I knew that if I caught [coronavirus] my body probably wouldn’t be strong enough to fight it.” 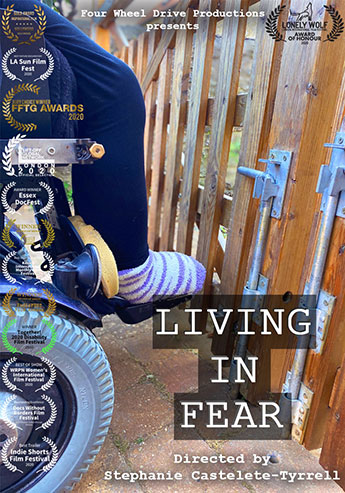 When it became clear that the pandemic would last for months rather than weeks, Steph realised her feelings of anxiety and confusion were shared by many other people with a disability. She decided to make a documentary about how people with a range of disabilities cope when forced to live in isolation.

The result – a film called Living in Fear – details Steph’s own turbulent experiences as well as those of people living with a range of disabilities including cerebral palsy, Chronic Fatigue Syndrome and respiratory conditions. Living in Fear has been shown at film festivals in the UK, Europe and America and has already won 12 awards.

Steph fell in love with movies at an early age. She said, “As a child with a disability it was hard to do a lot of things that kids do. Film was something that I could do and I spent a lot of my childhood watching films.”

Her early interest coalesced into a determination to work in the film and television industry. Her academic training – she has an MA in film and television from the University of Portsmouth – has been complemented in recent months by several vocational courses run by The National Lottery-funded ScreenSkills programme.

She got her first taste of ScreenSkills in September 2019 when she undertook several 1-day courses in social media, advertising and business skills. Then, in January, she won a place on 'Making the Cut', a 2-day professional film and TV training course for disabled people.

She said, “'Making the Cut' was all about editing and was taught by a professional editor who has been working in the industry for 20 years. It was a great chance to use editing equipment and build our skills and knowledge.”

Steph was offered 2 work placements with production companies in Bristol as part of 'Making the Cut', but has had to defer them due to the pandemic. 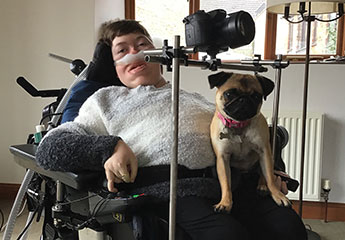 Acknowledging the challenges of following her dream she said, “I’d say it’s [film and television] a hard industry to break into for people without a disability and 10 times harder for people with disabilities.”

Not that she’s discouraged. As well as starting her own production company, Four Wheel Drive Productions, she is writing a script for a TV drama-thriller about a young girl who is diagnosed with muscular dystrophy and the impact it has on her family.

In the meantime, she’s waiting to hear if Living in Fear has picked up another award – this time from London’s prestigious Lift-Off Film Festival.

Summing up the past 12 months she said, “It has been a very scary time, but also exciting as I’ve helped to raise awareness of the struggles disabled people face.”

You can see the trailer for Living in Fear on vimeo.