Marc’s skating again and his family’s on board

As a former professional wrestler Marc Lawler knows a thing or two about pushing his body to the limit. But when the Nottingham dad took up skateboarding again in his late 30s, he soon realised it would not be a walk in the (skate) park.

Marc, 38, said, “It’s definitely harder now I’m older. I do find I shy away from things I used to do when I was skating the first time around. For example, when you see guys flying out of ramps and dropping back in, well that’s daunting.”

He’s taken a few tumbles since getting back on the board and admits he’s aggravated a few old wrestling injuries. But here’s the thing: he absolutely loves skateboarding. 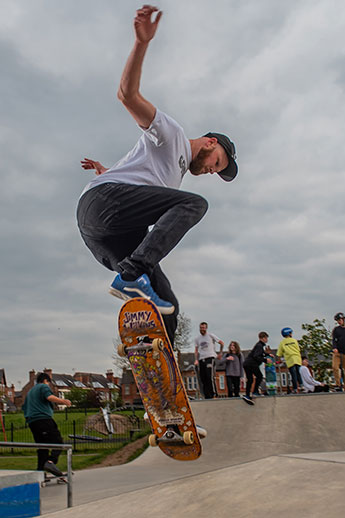 Part of the thrill is pulling off a new trick. When he first started riding at 18 he couldn’t skate rails (a scary looking trick that involves jumping the board onto a railing and sliding down it). Now he can and has the Instagram videos to prove it.

There are plenty of other benefits besides having fun. Skating has boosted Marc’s confidence, helped him relax and given him a hobby he can take part in with his kids rather than watch them from the sidelines.

At first, Marc didn’t tell his partner Vicky about his skating, but as he grew more confident he began to share his hobby with his family.

He said, “My 12-year-old son Brandon had a skateboard, but he wasn’t too keen on me trying to teach him, so we headed down to a Skate Nottingham event where the coaches really connected with him. He learnt some basic skills really quickly.”

Skate Nottingham puts on National Lottery-funded events at skate parks around the city, encouraging people of all ages to give it a go.

Marc’s stepson Bill, 11, also joined in, and soon the trio began to explore the skate parks.

Marc said, “We decided we’d try to visit as many different parks as possible. There are just so many now and they’re all really well designed. Thanks to support from The National Lottery, many skate parks have the funds to be maintained and improved.”

The buzz Marc and his kids get from skateboarding and learning new tricks is a great example of the fun, unexpected things that happen with the help of National Lottery funding. Or, as a new National Lottery campaign puts it: When we all play a little, fun stuff happens.

Marc started to go to more Skate Nottingham events as he wanted to show others that you can skateboard at any age. He also began to make friends as he would see the same faces at different events.

He said, “I didn’t have lots of confidence and always felt I was quite shut off from other people. But it’s such an inclusive pastime that I began to really feel part of the skating community.”

Marc and the boys began to record the skate parks they visited and also started to explore further afield. At the last count they had visited around 88 different parks.

Marc said, “We’re hoping to hit the 100 mark but we won’t stop there. It’s become a real family affair.” Vicky has bought herself a skateboard and Marc’s step-daughter Esme, 13, wants to get some roller skates.

As well as making them closer as a family, skateboarding has brought some other benefits. Marc said, “It really helped with my mental health over lockdown. It allowed me to take time for myself and unwind.

"I’ve also got to know Bill better and I’ve noticed that Brandon is really changing his attitude when it comes to learning new things. In the skate park, he has to really stop and approach things logically, and I can see that having a positive effect at school, as well.”

To see some skateboarding action check out our new TV ad.