Fun in hospital is kids’ play for National Lottery-funded charity

When it comes to being brave, Lily Lomas, from Winchester, has been there and got the T-shirt. In December 2020, she was diagnosed with a form of cancer so rare it only affects 1 in 16M people in the UK. 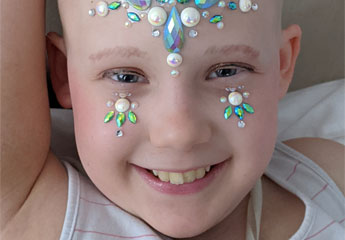 Lily, 10, endured long stints in hospital where, because of Covid restrictions, she wasn’t allowed visitors. But thanks to a National Lottery-funded charity called Spread a Smile, she got some much needed light relief during her treatment.

Her mother, Kirsty, 42, said, “We didn’t think anything of it at first as Lily’s quite accident prone and wasn’t poorly at all.”

The lump continued to grow, however, and on December 1, 2020 an oncologist at Southampton General Hospital delivered the devastating news – it was cancerous. Lily needed to start treatment immediately.

Lily said, “When I first went to the ward I didn’t know what cancer was – I’d never met anyone with cancer. When I had my line fitted I was so scared.” 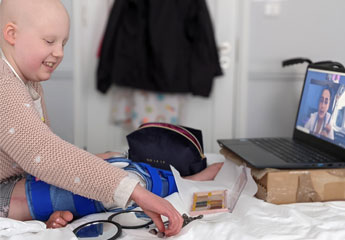 Kirsty, a university programme administrator, was by her daughter’s side during all her treatments and is in awe of her bravery.

She said, “When doctors told Lily she’d need chemotherapy she got upset because she might lose her hair. But half an hour later she was deciding what colour wigs she wanted. She’s been phenomenal throughout – so matter-of-fact about everything. She’s amazing.”

The play therapist at Southampton General told Lily about Spread a Smile. Prior to the pandemic the charity, which is supported by funding made possible by National Lottery players, provided children in hospital with visits from entertainers and trips out. In recent times, Spread a Smile has been providing its services online.

Lily said, “Spread a Smile took my mind off being in hospital or feeling sick. The first session was art and the artist Laura and I drew owls and coloured them in. Now I’m drawing a whole selection of cartoon superheroes – Wonder Woman, Batman and Spider-Man.”

Lily had an online Spread a Smile session every week, usually one-on-one but sometimes in groups, which Simon, Jake and Aria could join on a computer at home.

Alongside art, there were play and singing parties hosted by Spread a Smile fairies.

“They even managed to get Daddy dancing,” Lily laughs. 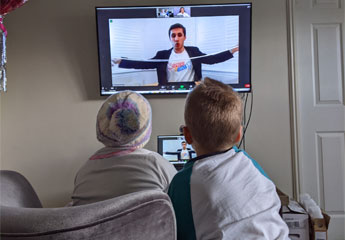 In June the leg brace Lily wore for 4 months post-surgery was finally removed and she underwent her last bout of chemo. Now, after an all-clear MRI, the family are waiting for a PET scan to confirm she’s cancer-free.

Kirsty said, “Thank you to all National Lottery players for helping support Spread a Smile.”