How a soccer mum got on the front foot

Sally Butler’s efforts to get more women playing football started at a young age. In the 1980s she was barred from joining the boys in the school team and responded by staging a sit down protest in the playground. 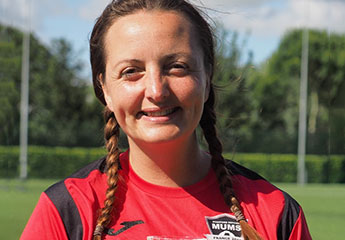 Sally said, “I was desperate to play, but it was still very much a boys’ sport back then. I’d kick about with the lads on the playground but they wouldn’t let me join the school team. I was absolutely outraged and staged a sit down protest on the playground. My mum was called to the school, but they let me into the team after that.”

Women’s football has come a long way since then, but Sally, 41, is still playing a leading role in encouraging more women onto the pitch. Her club – Stafford Soccer Mums – is an active participant in the Mums Play Football league, a National Lottery-funded competition designed to allow women to get their first taste of the beautiful game in a relaxed, sociable environment.

Sally said, “When you think about football, you think of fitness and running around. But the bigger thing for me is the friendships, the socialising and bringing people into it. We’ve had some seriously fun times.” 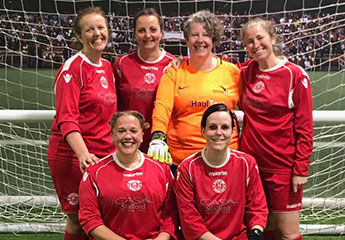 Stafford Soccer Mums began, as the name implies, as a group of women who turned out on the weekend to encourage their children from the touchline. Sally, who works in the criminal justice system and has two teenage daughters who play, said, “we got a bit inspired and fancied a go ourselves.”

When the team played their first matches in the highly competitive Staffordshire Ladies Over 30s league, they suffered some heavy defeats, but loved every minute of it.

The club has grown exponentially since then and now fields teams in the Mums Play Football league and the Staffordshire Ladies Over 30s league. Sally, who plays as a midfielder, said, “We’ve travelled all over the country to play and last year we went to France to take part in the Old Girls World Cup.”

The team wins as many matches as it loses nowadays, but in the Mums Play Football league, victory is only part of the story. Sally said, “You don’t have to be amazing. It’s all right to go out there and give it your all and come off with a smile on your face. It doesn’t have to be about getting to the top or crucifying yourself if you miss a kick.”

Supporting community football teams is just one of the National Lottery funding areas highlighted by our new TV ad and none of it would be possible without you, the players. By playing The National Lottery you raise £30MMillion for good causes every week.