How Dan found his voice (and friends) in an LGBTQ+ choir

Dan Jarvis talks about how an LGBTQ+ friendly choir is an inclusive space for neurodivergent people like himself. 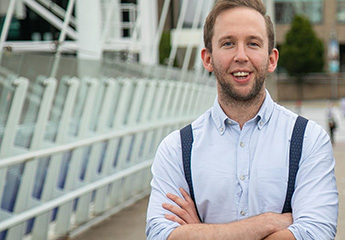 The 33-year-old said, “Clubs and bars can sometimes be a bit overwhelming and intimidating. But right from the start I found joining the choir a warm and welcoming experience – a new way to make friends, connections and positive relationships.”

He’s talking about The Sunday Boys, a musical ensemble describing itself as “an inclusive LGBTQ+ choir for low voice singers”. Dan is a founder member having answered the call when his friend, the composer Michael Betteridge, held the choir’s first rehearsal in the basement of a bar on Manchester’s Canal Street in January 2016.

About 16 people attended the first gathering. But the choir, which is supported by National Lottery funding, grew quickly. Nowadays, more than 60 singers regularly attend its weekly rehearsals in a converted church. 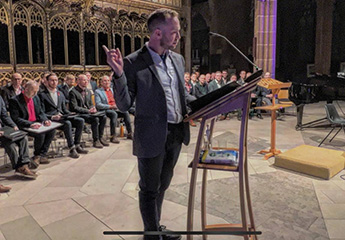 For Dan, The Sunday Boys has been a great way to meet a diverse group of people. He said, “I have friends in the choir who are 10 years younger than me and some that are 40 years older. Music is the thing we all have in common, but in pursuing that goal we have formed a community.”

The choir’s repertoire is eclectic and ranges from the pop of John Grant and Anohni to Stephen Sondheim show tunes and classical pieces. It has also performed choral work written for it by contemporary composers including Anna Appleby and Finn Anderson.

Dan said, “It’s challenging and emotive music. In most cases there’s an LGBTQ+ undercurrent because the music is either written by LGBTQ+ song writers or composers, or by artists like Kate Bush and Joni Mitchell who have a great resonance with the LGBTQ+ community.”

Like most organisations, The Sunday Boys had to adopt new ways of working when the pandemic struck. It was determined to support the LGBTQ+ community which was known to be at higher risk of social isolation and poor mental health during the lockdowns. 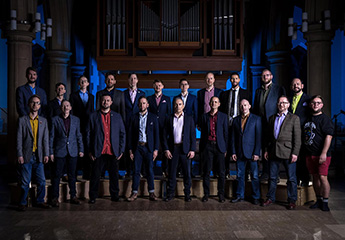 The choir’s weekly rehearsals moved online and it made several music videos (including a rendition of Queen’s 'I Want to Break Free') by editing together individual vocal performances recorded in bedrooms and bathrooms.

When the rules permitted The Sunday Boys came together again, holding socially distanced rehearsals in a multi-storey car park.

Dan is thrilled to be able to rehearse and socialise with the choir again. He said, “There’s something about singing as part of a group that’s really quite moving. We’ve sung to huge crowds and a few people in a church, but there’s always something deeply rewarding and communal about it.”