Tackling the loneliness of life with HIV during lockdown

For most people in the UK living with HIV the principal challenge of the coronavirus lockdowns has been dealing with feelings of deep isolation and loneliness.

Ian Green, the Chief Executive of The Terrence Higgins Trust said, “The key issue with lockdown for lots of people with HIV is linked to stigma. Because it is such a stigmatised condition, very few people in their family or network might know they’re living with HIV and being isolated in lockdown has created a huge sense of loneliness, trauma and struggling with their diagnosis and adherence to their medication.”

Added to that is the fact that many people with HIV have seen their social and support networks unravel or disappear during the pandemic. 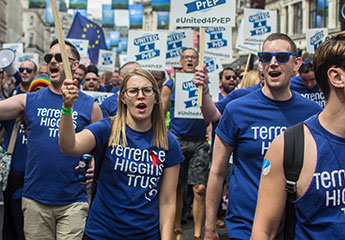 The Terrence Higgins Trust – a National Lottery-funded organisation that takes its name from one of the first people in the UK to die of an AIDS-related illness – has been working since the start of the pandemic to address the isolation experienced by many of the estimated 105,000 people in the UK living with HIV. As the largest voluntary sector provider of HIV and sexual health services in the UK, it moved quickly to offer its support services online.

Ian, 55, said, “Support from The National Lottery over the early part of the pandemic allowed us to radically increase our counselling services and develop an online support programme called 'THT At Home'. We’ve been able to offer individual and group counselling as well as social interactions to give people a wider sense of engagement.

A £100,000 grant from The National Lottery Community Fund’s coronavirus emergency fund also allowed the Trust to expand 'THT Direct', its national telephone helpline, into a 7-day a week operation so “there’s always someone to talk to”. 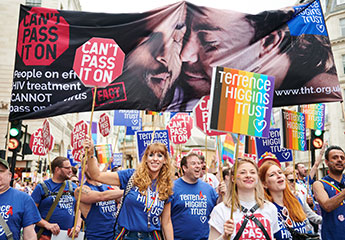 Ian, who learned he was HIV positive at the age of 31, said the efficacy of medical treatments of HIV had improved substantially since the 1980s. In 1996, he was told he could expect to live for another 8 years and was put on an experimental drug that had “awful side effects”. Nowadays, he takes just 3 tablets a day, suffers no side effects and has a normal life expectancy.

Unfortunately, the stigma surrounding HIV has been hard to dispel despite the rapid advance of medical treatments. Ian said, “People who live with HIV face stigma on a daily basis. Some are afraid to tell their doctor and some healthcare professionals still have outdated attitudes. There are still individuals on social media who talk about it as a gay disease which is completely untrue.”

In fact, almost half of those in the UK living with HIV are hetereosexual. Ian said, “it’s something that affects anybody, which is why it’s important for everyone to know their status regardless of their sexual orientation.”

Looking to the future, The Terrence Higgins Trust believes there is now a real opportunity to end new HIV transmissions in the UK by 2030.

Ian said, “The fact that less than 40 years since the death of Terrence Higgins we can be thinking about ending onward transmissions of HIV is really quite remarkable.”