Award confirms Wasem as king of the boxing ring

Winning a National Lottery Award was exciting for Wasem Said, the founder of the Tiger Bay Amateur Boxing Club in Cardiff, but being congratulated by former heavyweight and cruiserweight world champion, David Haye (aka The Hayemaker) was the icing on the cake.

Wasem, 29, said, “When the boys at the boxing club saw the Award and the message from David it gave them hope and positivity. It’s an amazing honour and it all helps to encourage them and build their confidence.”

The former gang member, who turned his life around after discovering the discipline of mixed martial arts training, has been named winner of the Sport Category in the 2020 National Lottery Awards. The Award recognises his work helping young people and his community in Butetown, one of Cardiff’s most deprived districts. 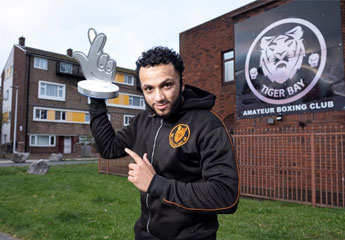 Wasem opened the Tiger Bay Amateur Boxing Club 2 years ago at Butetown’s Yemeni Community Centre. The club is attached to the local mosque and Muslim members can take the call for prayer while training.

The club’s aim – as well as getting young people fit and teaching them discipline – is to combat antisocial behaviour and prevent intolerance by creating a cohesive community of all religions, races and nationalities.

During the pandemic, Wasem has been leading a team of young volunteers who distributed 120 food boxes a week to vulnerable, shielding families. Wasem said, “It gets the young people motivated instead of them sitting in the house. It builds a relationship between us and our elders, it helps keep the boys on the straight and narrow and it teaches them at a young age that you have to be good in order to receive good.”

Congratulating Wasem on his award, David Haye said, “I know first-hand how keeping kids on the straight and narrow and off the streets is imperative to many kids’ futures. Wasem is a credit to Butetown, Cardiff and he should be truly proud of the work he has done for the community. Congratulations on winning the 2020 National Lottery Award for Sport.”

Wasem has personal experience of the problems faced by some young people in his community. He lost his dad at 15 and got into trouble on the streets while his older brother was away serving in the British Army.

His life turned around when he became interested in mixed martial arts and began training 3 times a week. The sport gave him the discipline and skills he needed to land a job in security.

Reflecting on the significance of the National Lottery Award, Wasem said, “It’s for everyone in Butetown and I hope it instils confidence in the young people we work with, and shows them that hard work in your community really pays off. We don’t normally receive positive awards like this in our community and this is a real boost for us.”