Abby Adams, a teenager from Barlanark in Glasgow’s East End, spent much of last year in bed. The pandemic shut down her life, robbed her of her confidence and motivation and pushed her into a deep depression. Her parents barely recognised their previously chatty, confident daughter. 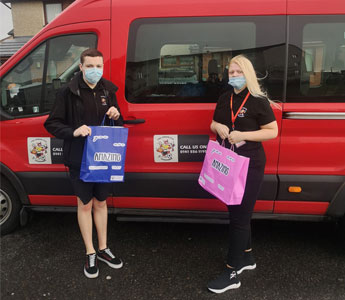 Abby, 18, said, “I would sleep all the time and barely spoke to anyone.”

Her life took a turn for the better when she saw an advertisement for the Urban Fox Programme, a National Lottery-funded charity devoted to giving young people – many of them from Glasgow’s socio-economically deprived East End – life skills and training designed to boost their confidence and substantially improve their job prospects.

Abby had never skied in her life, but with the support of Urban Fox she enrolled on a course that took her from absolute beginner to fully qualified assistant ski instructor. During her time on the Urban Fox Programme she also learned first aid and life skills such as how to write a cv and how to speak to people.

The training gave her the confidence to apply for a youth worker position within the charity. She said, “I was so nervous before the interview, I cried. “But [getting the job] has changed my life. I started in October [2020] and have been helping out through the pandemic. Without the Urban Fox Programme I think I’d still be in a really dark place.”

The pandemic has forced the Urban Fox Programme to adapt the way it engages with young people. Instead of youth groups and in-person projects, it has used its squad of youth workers to support younger children in the area.

Debbie McGowan, the charity’s manager, said, “The youth workers decided to put together an Easter activity pack for around 800 people in the community. They sourced all the materials they needed, like bunny-shaped felt, googly eyes and bags. They organised sandwiches and other food so families could have a meal and take part in the activity.”

Lewis Stewart, 18, is another Urban Fox youth worker. He helped make the activity packs and deliver them in a minibus to families. He said, “They would see the bus coming and their little faces would light up. It was really nice to be able to help them. And it was good for me to have something to do.”

The Urban Fox Programme’s most recent project was dropping off Mother’s Day thankyou bags to mums and carers.

Thanks to National Lottery funding, the charity has been able to launch a Young Start programme - a project designed to help children and young people boost their confidence and realise their potential. Craig Whyteside, who oversees the Young Start Programme, hopes to offer other programmes such as the Duke of Edinburgh’s Award scheme and a driving school when lockdown restrictions are eased and it is safe to do so.

Craig said, “I’ve really seen Lewis and Abby’s confidence grow over the past few months. “Just being involved has made such a difference to them.”

National Lottery players have raised £1BNBillion to help people across the UK during these unprecedented times.