As a soldier who deployed to the first Gulf War, Bosnia and Northern Ireland, Simon Hallam knows active service in a conflict zone can take a heavy toll on mental health. 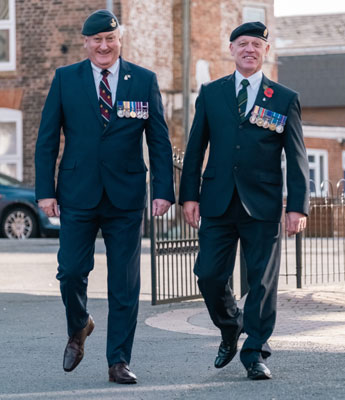 The 51-year-old said, “I was 20 when I went to the Gulf and something like that makes you grow up very fast. You can train all you want, but it doesn’t prepare you for some of the things you see.”

Simon’s 12-year career in the military ended in 2001. At the time he told friends he’d had enough, but the truth was more complex: he was facing serious mental health issues as a result of his active service.

He said, “I was very unwell. I took an overdose because I just couldn’t bear the thought of life anymore.”

In 2004, Simon was diagnosed with Complex PTSD and began to get the medical help he needed. But he still had the feeling that no-one in civilian life really understood him. He bounced from job to job and often felt out of place in the workplace. He said, “My mindset was ‘unless you’ve stood in the desert with me or been on that mountain in Bosnia with me, you wouldn’t understand what I feel like’.”

Simon’s realisation spurred him to team up with David Poultney, a friend and fellow veteran, to found The National Lottery-supported project Veterans Support Service (VSS). Launched in 2019, the Lincolnshire-based service aims to help struggling veterans “normalise their lives and get back to being independent”.

The key, said David, is that the help and advice comes from 2 veterans who know exactly how hard it can be to establish a new life after leaving the military. He said, “When you’re in a dark hole a lot of people will look over the edge and offer you help. We climb into that hole and help them climb out. That’s the difference. We understand them as veterans and as people struggling with mental health.”

David, 66, served in the RAF for 38 years. As a tactical communications expert and trainer he didn’t serve on the frontline or witness the horrors of war first hand. But when he retired at the age of 55 and took a job in adult education, he also found it hard to adjust.

He said, “I quite enjoyed teaching, but I was mostly working on my own and I felt I wasn’t part of anything. I felt a loss of identity and that’s when the anxiety kicked in.”

Simon compares the loss of the camaraderie a soldier experiences when they leave the armed forces to a bereavement. He said, “It’s a way of life, not just a job. Every aspect of what you do is about supporting colleagues and working as a team and there’s a huge sense of belonging.”

The camaraderie helps serving members of the armed forces “keep pushing through”. But when they leave the military, any mental health issues tend to rise to the surface.

In its relatively short lifespan VSS has already helped about 140 veterans. The nature of that help depends entirely on the individual’s needs. For some, it’s help filling out forms or advice on housing or benefits; for others it’s a simple chat on the phone with someone who understands the pitfalls of life outside the armed forces. Funding made possible by The National Lottery has helped VSS set up an office and do the planning necessary to ensure it’s a sustainable project.

That’s vital, said David, because there is so much important work to do. He added, “You might put the baggy green uniform on, but you never stop being a human being. And it’s when humanity starts creeping back into you that it takes its toll. The lid comes off the jar.”