The dogs beating loneliness one woof at a time

When Sheila Moody’s husband died six years ago, the retired publican began to feel desperately lonely. Living in a rural part of County Durham with no family close to hand, the 91-year-old yearned for the company of a dog, but felt unable to give it regular walks.

Sheila said, “I’ve always had dogs, ever since I was a kid. When I was in infant school in London I had a dog called Bernard who used to take me to school. He’d take me home at lunchtime and drink my milk.” 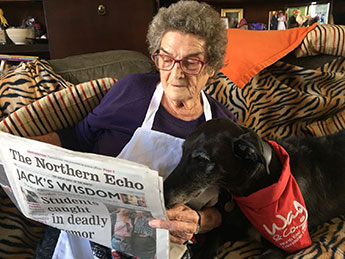 Four-legged company arrived in the shape of Eddie – “a wonderful Black lurcher” – who paid his first visit to Sheila four years ago accompanied by his owner, Diane. The visit was arranged by Wag & Company, a National Lottery-funded charity that provides elderly dog lovers with a dose of canine company in their own homes, in care homes and in hospitals.

Wag & Company has more than 400 volunteers and dogs – Wag Teams as they’re known – making weekly visits to isolated elderly people in the North East of England. It is estimated that 51,000 pensioners in the region are chronically lonely and they are more than 50% more likely to die prematurely than people with good social networks.

Sheila said she bonded immediately with Eddie and Diane. She said, “He’s so tall and elegant! I think he should be called Duke Edward. He’s such a lovely boy.”

“When Eddie turned up on my doorstep it was paradise. It’s made a big difference to my life.”

Eddie’s visits were suspended during lockdown because Sheila was shielding due to her age. But Diane kept in touch, sending pictures of Eddie and regular updates on his adventures.

A typical visit starts with 12-year-old Eddie climbing onto the sofa and putting his head on Sheila’s lap. She said, “I’ll cook him some chicken, because he loves chicken. Sometimes Diane and I will have lunch together and if it’s a nice day we’ll take Eddie out for a walk. The visits have made a hell of a difference to my life.

“I think I was a dog in a previous life. If you‘ve always had dogs like me nothing beats a cuddle from a dog.”

Supporting the training of assistance dogs is just one of the National Lottery funding areas highlighted in our new TV ad and none of it would be possible without you, the players. By playing The National Lottery you raise £30MMillion for good causes every week.