Give me Moore: why veteran Amy came back to softball

Softball catcher Amy Moore is that rare thing: a member of the sport’s Hall of Fame who still plays at the highest level. 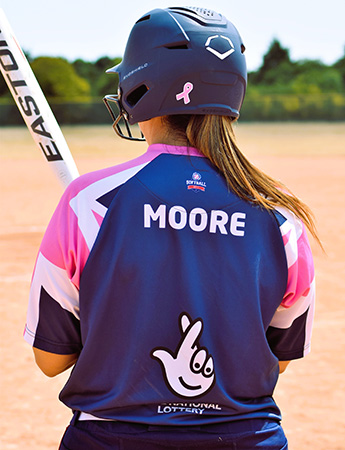 Amy, 31, retired from the sport in 2019 after being selected for the GB Women’s Fastpitch Softball Team an incredible 9 times. She dusted off her glove and rejoined the team this year to lead the charge at the Women’s Softball European Championships in Barcelona. The GB players walked away with a silver medal – their best result at the competition since 2009.

Amy said, “It’s really humbling because I never thought I’d be able to get back into shape and the team that we have is something special. I believe in us and if I didn’t I wouldn’t be here.

“Being back out there I realise how much I miss it. This team is one of the best teams I’ve played on for GB because we have the skill, the coaching and the talent.”

Supporting every pitch and swing of the bat is funding made possible by National Lottery players. It helps Amy and her teammates access top coaches and elite training facilities such as Bisham Abbey National Sports Centre and Farnham Park National Baseball & Softball Complex. Amy said, “Their [National Lottery players] contributions to our programmes are helping us tremendously. Everything that happens behind the scenes is going to show on the field.”

Amy lives in Los Angeles and formerly worked as a ball girl for the city’s legendary baseball team, The Los Angeles Dodgers. She grew up in the US, but the fact her father, Steve, is British makes her eligible for the GB squad.

Being a catcher – a role roughly equivalent to a wicket keeper in cricket – is one of the sport’s most physically demanding positions. And Amy has had her setbacks. In October 2017 she was injured in the mass shooting at the Route 91 Harvest Festival in Las Vegas. She broke her foot in the pandemonium, but she and her partner and fellow Dodgers ball girl Christina Zambrana, managed to reach safety. 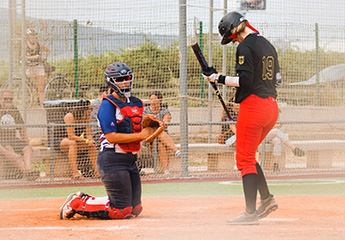 As the oldest member of the GB Women’s Fastpitch Softball Team, Amy is a mentor for younger players. In particular, she is guiding the team’s 2 other catchers who have a combined age of 38.

While Softball and Baseball won’t be featured at the Paris 2024 Summer Olympics, it appears highly likely they will be resurrected at the 2028 Summer Olympics in Los Angeles.

You can watch the interview with Amy below.